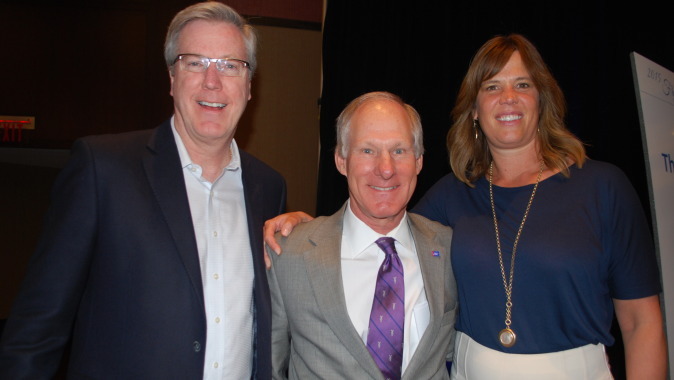 The honor is awarded annually to a college coach who has been engaged vigorously in the Coaches vs. Cancer program’s fundraising, education and promotional initiatives and has demonstrated leadership in the fight to save more lives from cancer.

Working as a team with wife Margaret McCaffery, Coach McCaffery turned their family struggle into an open and ardent fight. When their 13-year old son Patrick was diagnosed with a cancerous tumor during the 2014 NCAA tournament, the McCaffery’s shared their grief, fear and struggle with the team, their fans, and the world at large. They directed contributions to the American Cancer Society and Coaches vs Cancer, and many fundraisers started spontaneously, including T-shirts sales with #teammpat to fund cancer research.

For 15 years, the McCafferys have been involved actively with the Coaches vs. Cancer program and have raised significant funds to support the American Cancer Society’s efforts, including more than $1.3 million since 2010. Coach McCaffery’s work has been instrumental in promoting cancer awareness throughout Iowa and the surrounding region.

“The American Cancer Society, in conjunction with the NABC, is pleased to recognize Coach Fran McCaffery and his wife Margaret for their outstanding work with Coaches vs. Cancer,” said Dr. John Seffrin, American Cancer Society’s Chief Executive Officer. “Together they pose a formidable force in the fight against cancer and we are grateful for their ongoing commitment to the Society’s lifesaving work.”

Several other national events throughout the year continue to highlight the productive work of Coaches vs. Cancer, including the Coaches’ Huddle and Fight Cancer In Style – an event for coaches’ wives – held April 4 at the Hyatt Regency during the Final Four weekend; and the 15th Annual Coaches vs. Cancer Golf Invitational, June 7-8 at East Lake Golf Club in Atlanta.