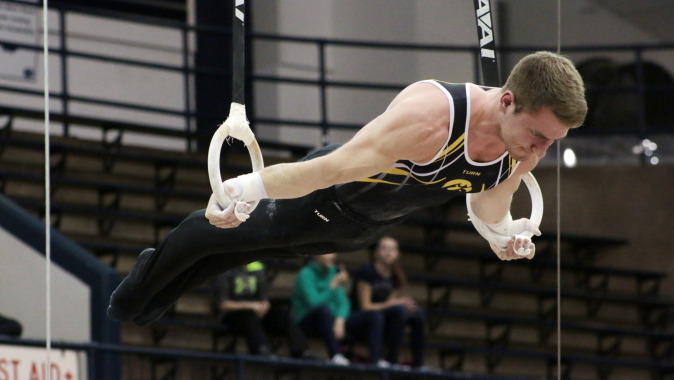 THIS WEEK:
The No. 8-ranked University of Iowa men’s gymnastics team competes at the NCAA Championships, hosted by the University of Oklahoma. The meet will take place on April 9-11 inside the Lloyd Noble Center in Norman, Oklahoma.

FOLLOW ALONG:
Fans can follow the meet online through live stats. A live stream of the meet is also available. Links to both are located on the Iowa men’s gymnastics schedule page at hawkeyesports.com. The meet will be televised on Fox College Sports Atlantic.

HISTORICALLY AT THE NCAA CHAMPIONSHIPS:
?The Hawkeyes have won an NCAA title once in 1969 when Newton Loken was the coach.
?Since 1998, Iowa has finished in the top 5 nationally three times (1998, 2000, 2013).
?Nine Hawkeyes (Lance Alberhasky, William Albert, Jack Boyle, Brandon Field, Cyrus Dobre-Mofid, Matt Loochtan, Del Vecchio Orozco, Emmanuel Monroy, and Doug Sullivan) remain from the 2013 team.
?In 2013, Javier Balboa became the first Hawkeye since 2005 to become an all-around All-American. He also was named an All-American on rings with teammate Anton Gryshayev. Three All-America honors are the most since 2005.

SCOUTING THE FIELD:
?Oklahoma comes in as the top ranked team in the country. The Sooners set an NCAA record with a team score of 457.300 against Illinois on Feb. 27. The team also comes in as the MPSF champions, defeating Stanford, California and Air Force. Oklahoma is ranked first on every event this season.
?Stanford is ranked second behind Oklahoma. The team’s notable wins include a victory over Illinois on March 6. The Cardinals have the nation’s top all-around gymnast in Akash Modi (89.863 average).
?Penn State comes into the postseason as the highest ranked Big Ten School (437.850 average), and the 2015 Big Ten Champions. The Nittany Lions defeated Iowa in both their regular season meetings this season. Michigan finished third at the Big Ten Championships, following back-to-back Big Ten titles. The team posted a season high 443.050 and is tied for second in the country on vault, (74.325 average).
?The Illinois Fighting Illini are coming off a second place finish at the Big Ten Championships. The Illini average a team score 432.805 on the season. Illinois has the Big Ten Freshman and Gymnast of the Year in Bobby Baker.
?Minnesota ranks two spots ahead of Iowa in the latest national poll according to roadtonationals.com (April 6). Iowa has faced off against Minnesota three times this season, most of any team, winning once and losing twice. Minnesota has the reigning Big Ten Champion on pommel horse in Ellis Mannon.
?Ohio State enters the NCAA Championships following a fifth place finish at the Big Ten Championships. The Buckeyes average a 429.663 in their meets in 2015. Iowa defeated Ohio State on February 1.
?Nebraska ranks 11th in the latest national poll, averaging a 421.679. The Hawkeyes defeated the Cornhuskers twice this season including the team’s season finale with Minnesota and Penn State.

SIX HAWKEYES SET CAREER HIGHS ON VALENTINES DAY:
At a February 14 meet in Iowa City, the Hawkeyes set six career-highs and came from behind to defeat Minnesota and Nebraska on Senior Night. Iowa set a season high on parallel bars with a 72.800. Cory Paterson (14.400), Matt Loochtan (14.800) and Dylan Ellsworth (14.500) all set career highs on the event. Paterson also set a career high on high bar with a 14.900.

BOYLE NAMED GYMNAST OF THE WEEK:
Junior Jack Boyle was named Co-Big Ten Gymnast of the Week following Iowa’s win over UIC on Jan. 24. Boyle contributed two event titles — on rings (15.400) and floor (14.750) and finished second on parallel bars (14.400). It is Boyle’s first weekly honor of his career and the first for the Hawkeyes since Matt McGrath earned the award on March 17, 2014.

LOOCHTAN COMPETES IN WINTER CUP FINALS:
The University of Iowa men’s gymnastics team sent Matt Loochtan to represent the Hawkeyes at the Winter Cup Challenge in Las Vegas, Nevada, on Feb. 20-22. Loochtan qualified for finals following a 15.010 on vault, finishing fourth overall. In finals, he scored a 14.900 clinching fourth overall on vault with a combined score of 30.010. Loochtan’s other events included a 14.600 on floor, claiming eighth place, 13.650 on rings, and 13.250 on parallel bars.

IOWA SETS SEASON HIGH TEAM SCORE:
In a Feb. 27 meet at Penn State the Hawkeyes set a new season high team score with a 435.750. Despite the performance, Iowa fell to Penn State. The team set a new high score on high bar (71.850) and junior Jack Boyle was first on the event, scoring a season high 14.900. Junior Cyrus Dobre-Mofid finished first on parallel bars and set a career-high with a 15.150.

SPECTACULAR SULLIVAN:
Junior Doug Sullivan ended the regular season in 10th place in the country on pommel horse. Sullivan posted a top three scores of 14.917 with event titles at the Windy City Invitational (14.900), against UIC (14.950), and at Illinois (14.850). At the Big Ten Championship, Sullivan was named second team all-conference on pommel horse with a score of 14.450.

3 FRESHMEN CONTRIBUTE:
Iowa has had three freshmen come in and contribute immediately. Dylan Ellsworth, Austin Hodges and Elijah Parsells were all regulars in the lineup. Ellsworth competed on rings, vault and parallel bars. He posted a season high 14.800 on vault, third best on the team, while Hodges and Parsells saw their best scores on pommel horse. Parsells, a specialist on the event, scored a season high 14.750 for second best on the team behind Sullivan and Hodges’ 14.450 was fourth best.