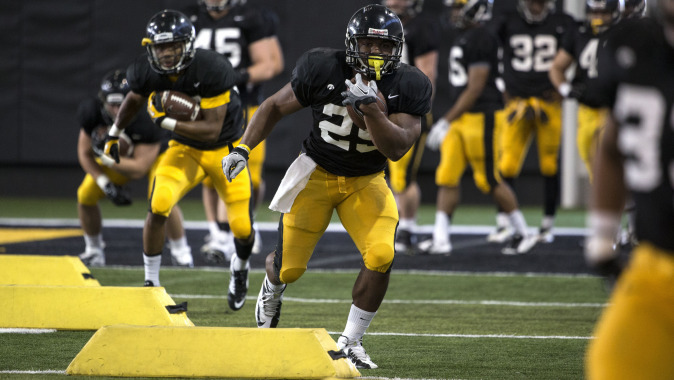 IOWA CITY, Iowa — University of Iowa football fans got a chance to see the Hawkeyes in pads for the first time this spring April 11 in Des Moines. One of the players fans were eager to see was junior running back LeShun Daniels, Jr.

Daniels saw limited carries last season (15 attempts for 49 yards) because of an injury in October and with senior Mark Weisman earning a bulk of the work load in the backfield. On Saturday, fans saw a leaner Daniels from a year ago.

Daniels, who is listed as a co-starter alongside senior Jordan Canzeri on the two-deep, said he has been working on an improved diet and additional conditioning to get him in the best possible shape for the 2015 campaign.

“I focused on my diet a lot, eating more fruits and vegetables, and did some extra conditioning to help get the weight down to where I want it to be,” said Daniels. “It was difficult at first, but after a while you get used to it.”

The Warren, Ohio, native says he feels the difference, has more energy, and can make different moves. His offensive line teammates have noticed a change.

“I think the little weight off his frame has helped him accelerate a little faster to the hole,” said senior center Austin Blythe.

Observing how Weisman prepared for each game and took care of his body is something Daniels is grateful for in making him a better player.

“Watching Mark the past two years has been a blessing,” said Daniels. “I can’t thank him enough for what he has done for me and this program. I’m glad he was here to teach me.”

Spring practice is just the beginning of training and preparing for the 2015 season. Daniels plans to concentrate this offseason on improving his speed and agility.

“Even with the weight loss, I’m still stronger than I was last season,” said Daniels. “Dropping the weight has made my speed and quickness night-and-day from what it was before.”

“He doesn’t look nearly as bulky, and you see it on the practice field,” said White. “His movement and his pad level are markedly better. He looks fantastic.”

Daniels said White has emphasized improving in all aspects of the game this spring to the running back group.

“He wants us to be well-rounded in all aspects of the game: running, blocking, and pass catching,” said Daniels.

Daniels said the goal every day is to improve as a team.

“We want to continue to work on our fundamentals so we can be better prepared for the season,” said Daniels. “I can improve every aspect of my game, whether it’s seeing a hole there, picking up a block there, or making a catch there. Working on that every day will pay dividends when the season starts.”