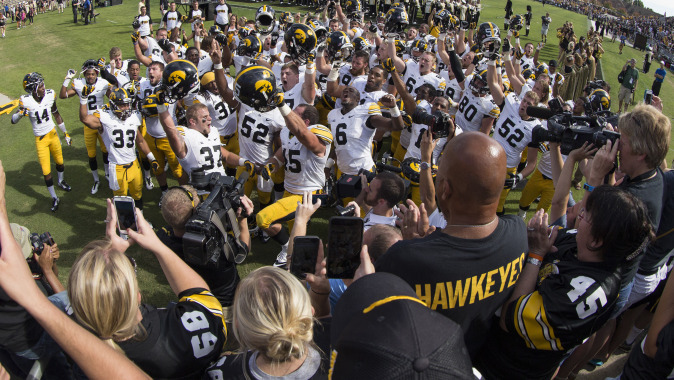 IOWA CITY, Iowa – – The University of Iowa will conclude spring practice with an open practice Saturday, April 25, at Kinnick Stadium, but due to the weather forecast, several of the pre-practice activities have been cancelled. The final practice will begin at 1 p.m., with gates opening at noon.

UI athletic officials announced Friday that the pre-practice events scheduled in the Krause Family Plaza, in conjunction with the open practice, have been cancelled due to the weather forecast for cold, wet and windy conditions.

A 20-minute autograph session with members of the Hawkeye football team, scheduled to begin at 12:35 p.m., may be cancelled in the case of rain and/or severe weather.

“The Hawkeye football team has every intention of completing its final practice of the spring session in Kinnick Stadium on Saturday,” said Rick Klatt, assistant athletic director for external relations. “However, the weather forecast for Saturday may impact the practice session, and has caused the cancellation of some of the other activities in and around Kinnick Stadium. The safety of our student-athletes and fans of the Hawkeyes is our primary concern.”

There is no admission charge. Fans are invited to join forces with the UI Athletics Department and the Johnson County Crisis Center in the annual ANF Food Bank Drive. Fans are invited to bring non-perishable food items to the event. Collection bins will be located in Krause Family Plaza, beginning at 11 a.m., and at each of the open entrances to Kinnick Stadium, beginning at noon.

The Hawkeye Sports Network will be on the air from 1 to 2 p.m., with Gary Dolphin and Rob Brooks discussing spring football and the upcoming season. Affiliates include KCZE (New Hampton), KDTH (Dubuque), KUOO (Spirit Lake), WHO (Des Moines), KGLO (Mason City), WMT (Cedar Rapids), KSCJ (Sioux City), and WOC (Davenport). The broadcast can also be heard on Sirius channel 108 and XM 195 on satellite radio.

The practice will feature the offense versus the defense, with the same scoring system that has been used the past two seasons, allowing both the offense and defense to score points based on performance.

Questions concerning the purchase of 2015 football tickets, including general public, UI faculty/staff and UI student seasons tickets by current UI students, should be directed to the UI Athletics Ticket Office. The office is open weekdays from 9 a.m. to 5 p.m. The office telephone number is 1-800-IA-HAWKS.