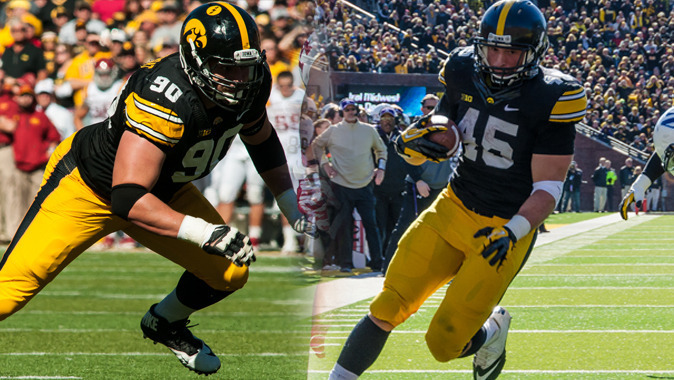 Now in its ninth year, the Hampshire Society recognizes senior football players who are starters or significant reserves, and carry a cumulative grade point average of 3.20 or higher (on a 4.0 scale) throughout their college career. The NFF recognized 817 players from a record 278 college football programs at all levels. The entire list can be found on the National Football Foundation website, http://www.footballfoundation.org.

Trinca-Pasat is a native of Chicago, Illinois. He carried a 3.2 GPA as an undergraduate and 3.61 GPA while pursuing a Master’s Degree in Educational Policy and Leadership Studies. He is a three-time academic All-Big Ten honoree, and was named second team All-Big Ten by the coaches and media in 2014.

As a senior, Trinca-Pasat tied for 12th in the Big Ten in quarterback sacks (6.5), and tied for 17th in tackles for loss (11.5). His 69 tackles led all Big Ten lineman. He started all 38 games over his final three seasons, and in 2014 he was named Permanent Team Captain, Defensive MVP, and presented the Hayden Fry “Extra Heartbeat” Award.

Weisman, a native of Buffalo Grove, Illinois, holds a 3.32 grade-point average and is majoring in health and human physiology. He earned academic All-Big Ten recognition in 2012 and 2013, and is a three-time honoree on the UI Dean’s List.

The Hampshire Honor Society represents a powerful component in the NFF’s rich history as an innovator in promoting the scholar-athlete ideal. Since its inception in 1959, the NFF’s National Scholar-Athlete Awards program has awarded $10.7 million to 804 top scholars and community leaders.