Carl Davis Selected in 3rd Round by Baltimore 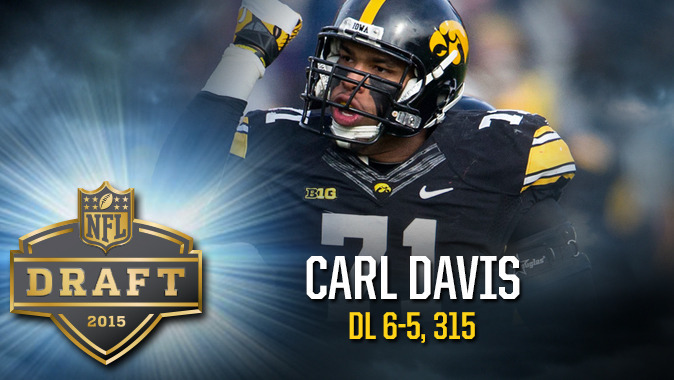 Davis (6-foot-5, 315 pounds) is a native of Detroit, Michigan, where he attended Stevenson High School before joining the Hawkeye program. He earned second-team All-Big Ten accolades as a senior by both league media and coaches. Davis was named the Practice Player of the Week while preparing for the 2015 Senior Bowl.

Davis started all 26 games over his final two seasons at defensive tackle. As a senior he recorded 36 tackles, including nine tackles for loss and two sacks. He earned the Coaches Appreciation Award for defense. Davis completed his career with 94 total tackles.

Davis is the 24th Iowa player selected in the draft over the past six years. He is the first Hawkeye defensive lineman selected since Mike Daniels (fourth round, Green Bay) was selected in the 2012 draft.

Iowa has had at least one player drafted in every NFL Draft since 1978.

The Ravens won the Super Bowl just three years ago and last season were eliminated from the playoffs by the Super Bowl champion New England Patriots. The Baltimore offensive line features former Hawkeye Marshal Yanda. The Ravens are coached by John Harbaugh and their defensive line coach is Clarence Brooks.