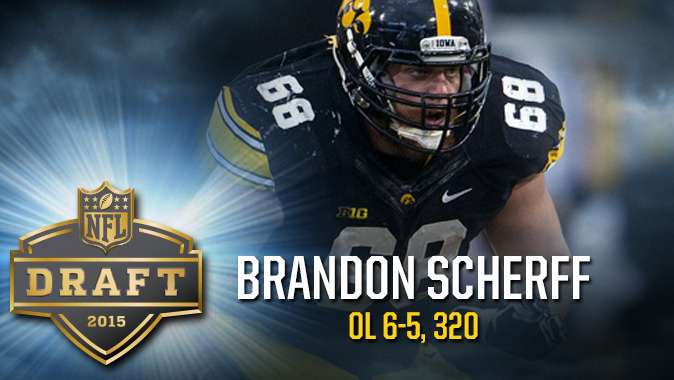 CHICAGO — Moments after University of Iowa offensive lineman Brandon Scherff was selected fifth overall by Washington in last night’s NFL Draft, one of the commentators referred to the pick as the first curveball of the draft.

That isn’t a knock on Scherff, it’s just that most mock drafts had him going to the New York Giants with the ninth pick or the St. Louis Rams at No. 10.

So much for mock drafts.

Scherff has never forgotten his Denison (Iowa) roots. He was a pitcher/first baseman for the Monarchs baseball team in high school, where he threw curve balls from the mound and knocked them out of the park at the plate.

“I handled curve balls pretty well,” Scherff said from the lobby of The Palmer House Hilton.

This time it was Washington that hit a grand slam by picking the 2014 Outland Trophy winner and consensus All-American. And the Redskins’ offensive line added a 2015 version of “The Hogs” — a flattering moniker for offensive linemen George Starke, Russ Grimm, Jeff Bostic, Mark May, and Joe Jacoby in the early 1980s.

If the Redskins threw a curveball, it was to the NFL teams selecting after them. Washington only spoke to Scherff at the NFL Combine from Feb. 17-23 in Indianapolis and not again until head coach Jay Gruden phoned him in the Green Room last night at Roosevelt University.

“They just said, I want you to be a Redskin, and I was like, absolutely, I would love that,” Scherff said. “I talked to (offensive line coach Bill) Callahan, and he said he loves the way I play, and they can’t wait to get me out there.”

It ended a two-month communications hiatus between Washington and Iowa’s behemoth lineman.

“We just talked about film, what my role is on each play, and just pretty much the background,” Scherff said of his Combine interview with the Redskins. “They really didn’t have me do any plays for them, they just had me draw up a couple plays for myself, and that was really it for them.”

Meanwhile, Scherff was a frequent flyer to the state of New York, visiting both the Jets and the Giants.

Since Jameis Winston (choice No. 1 by Tampa Bay), Marcus Mariota (No. 2 by Tennessee), and Amari Cooper (No. 4 by Oakland) did not attend the draft, Scherff was the second draftee to step on stage for the obligatory grip-n-grin photograph with NFL Commissioner Roger Goodell. Preceding Scherff was Dante Fowler, Jr., of Florida, who went No. 3 to Jacksonville. Fowler sauntered on stage in a custom-made white suit and sparkling gold shoes.

Scherff wore a two-year-old suit he bought at Men’s Wearhouse in Coralville.

Scherff is the seventh first-round draft choice under UI head coach Kirk Ferentz and the third Hawkeye offensive lineman to go in the first round in the last six years. He is the fifth Iowa first-rounder in the last 10 years, which ties the Hawkeyes with Clemson, Georgia, Notre Dame, and Oregon.

“Just be the best player you can be, get a starting job, and everybody wants to win the Super Bowl, so that’s the next thing right there,” Scherff said.