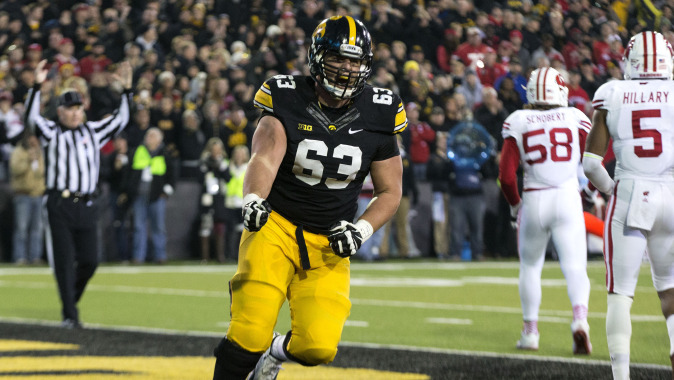 IOWA CITY, Iowa — University of Iowa senior center Austin Blythe is one of 50 players named to the 2015 Rimington Trophy Spring Watch List. The announcement was made Tuesday by the Rimington Trophy Committee. The Rimington Trophy is presented annually to the Most Outstanding Center in NCAA Division I college football.

Blythe (6-foot-3, 290-pounds) started all 13 games in 2014. He has started 31 straight games over the past three years and has 35 career starts. Last season, Blythe started the first six games at center before moving to guard for the final seven games due to injuries to others in the offensive line.

Blythe is a native of Williamsburg, Iowa. He has been named to Iowa’s Leadership Group for four straight years. He is one of five Big Ten candidates on this year’s Rimington list.

The Rimington Trophy is presented annually to the Most Outstanding Center in NCAA Division I-A College Football. Since its inception, the Rimington Trophy has raised over $2.6 million for the cystic fibrosis community. The 14-year-old award is overseen by the Boomer Esiason Foundation, which is committed to finding a cure for cystic fibrosis and has raised over $115 million for CF Research.

Dave Rimington, the award’s namesake, was a consensus first team All-America center at the University of Nebraska in 1981 and 1982. For more on the Rimington Trophy and a list of past recipients, visit rimingtontrophy.com