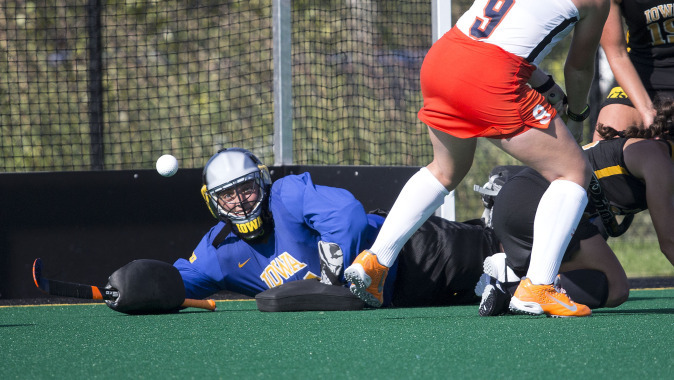 IOWA CITY, Iowa — University of Iowa juniors Alexandra Pecora and Chandler Ackers have been selected to show off their skills at USA Field Hockey’s 2015 U21 Junior National Camp held at the Spooky Nook Sports Complex in Lancaster, Pennsylvania, from June 30 to July 3.

The Junior National Camp is the premier camp for Under-21 athletes, comprised of the top athletes selected from the National Futures and Futures Elite Championship. Based on their performances from the camp, athletes may earn selection to additional USA Field Hockey programs, including the Under 21 Junior National Team.

Pecora started 17 games at goal as a sophomore last year. She won 10 games, collecting 78 saves and posting a .722 save percentage. She was named Big Ten Defensive Player of the Week (Oct. 28) after registering a shutout over fifth-ranked Penn State. The Marlton, New Jersey, native competed at the U.S. U21 Championship in 2014.

Ackers (B/MF), a native of White Haven, Pennsylvania, started all 18 games for the Hawkeyes a year ago as a sophomore totaling 11 points on two goals and a team-best seven assists.