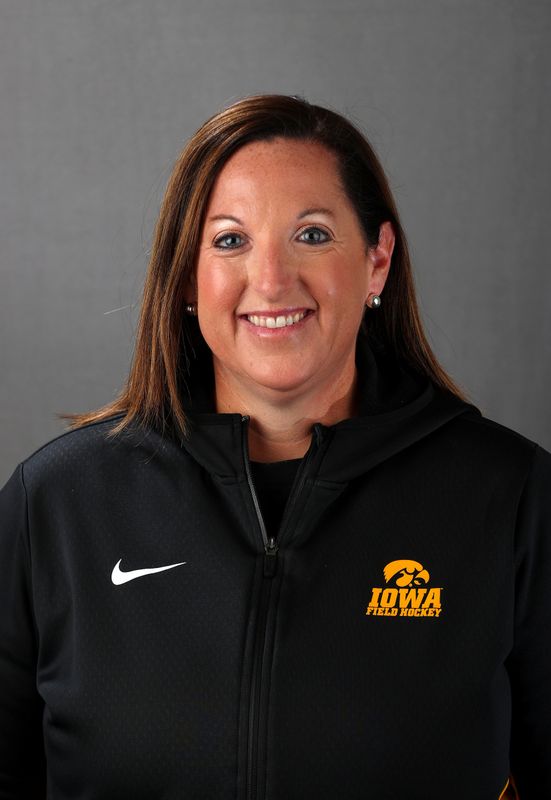 Lisa Cellucci enters her 23rd season as a member of the University of Iowa field hockey team’s coaching staff in 2022-23 and her ninth as head coach. Cellucci, a three-time All-American and member of the U.S. National Team, is the all-time saves leader at Iowa. In her 22 years at Iowa, the Hawkeyes have compiled a 268-163 record and have been consistently ranked in the top 15 of the NFHCA national rankings.

In the past three seasons, the Hawkeyes have been a top 10 team in the national poll and the team ascended to the No. 1 spot in the rankings for seven straight weeks during the 2021 season.

In her eight years as head coach, Cellucci has coached:

During the 2019 season, Cellucci led the Hawkeyes to their 13th Big Ten regular season title, sixth Big Ten Tournament crown, and 17th Elite Eight appearance in program history. She was named Big Ten Coach of the Year, while her and her staff were named NFHCA West Region Coaching Staff of the Year for the second consecutive season.

In 2018, Cellucci led Iowa to its 23rd NCAA Tournament appearance in program history with a 14-7 (4-4) record. The Hawkeyes posted seven wins over top-25 opponents, including two over top-10 Penn State, to earn an at-large Sweet 16 bid against Wake Forest. Cellucci and the Hawkeyes made a Big Ten Tournament run as the sixth seed to finish as the runner-up.

Cellucci and her staff were named NFHCA West Region Coaching Staff of the Year after mentoring two NFHCA All-Americans, five NFHCA All-West Region selections and three All-Big Ten honorees. Sophomore Maddy Murphy, a NFHCA third-team All-American, led the team in goals (13) and points (33), junior Katie Birch, a NFHCA second-team All-American, led the team in assists (10) and shots (56), and junior Sophie Sunderland, a NFHCA second-team All-West Regional selection, was third on the team in goals (7), assists (5), and points (19). Cellucci was also instrumental in Iowa’s defense who allowed only 1.10 goals per game along with seven shutouts.

In 2015, Cellucci led a pair of Hawkeyes to postseason accolades. Stephanie Norlander earned All-America honors for the second straight year and was named NFHCA first-team All-Region. Norlander, the Big Ten Offensive Player of the Year, finished the season ranked third in the Big Ten in goals (16) and fourth in points (26). Chandler Ackers earned the first postseason honors of her career. The junior was named second-team all-region and second-team All-Big Ten after tallying a career-high eight goals and registering six assists.

In 2014, Iowa was ranked seventh nationally and averaged more than three goals per game. Natalie Cafone and Stephanie Norlander earned NFHCA All-America accolades under Cellucci’s guidance to become the 86th and 87th Hawkeyes to earn the distinction in program history. Cafone, who earned All-America honors for the second straight season, led the Big Ten in goals and points, and ranked fourth and seventh nationally, respectively.

Hawkeye goalkeepers have excelled under the mentorship of Cellucci. In 2012, Cellucci was a crucial part of the team’s success as Iowa reached its 22nd NCAA Tournament in program history. Senior Kathleen McGraw earned first-team All-Big Ten and second-team All-America recognition. McGraw, who was a three-time Big Ten Defensive Player of the Week, played every minute in goal and posted five shutouts to lead Iowa to a 14-7 record and its second-straight NCAA Tournament appearance. Her 1.58 goals against average ranked second in the Big Ten and 17th nationally. McGraw closed out her career with 336 saves, the fourth-most in school history.

Barb Weinberg, a 2005 graduate, became one of nation’s top goalkeepers and went on to become a member of the USA National Team from 2005-10. Under Cellucci’s guidance, Weinberg became a two-time all-American, three-time all-Big Ten selection and three time all-region pick.

As a student-athlete, Cellucci was one of the greatest goalkeepers in program history. During her four years at Iowa, she was a three-time All-American, four-time All-Big Ten selection and four-time regional All-American.

Cellucci, who serves on the Board of Directors for the Iowa Letterwinner’s Club, graduated from the University of Iowa in 1998 with a bachelor’s degree in communication studies.