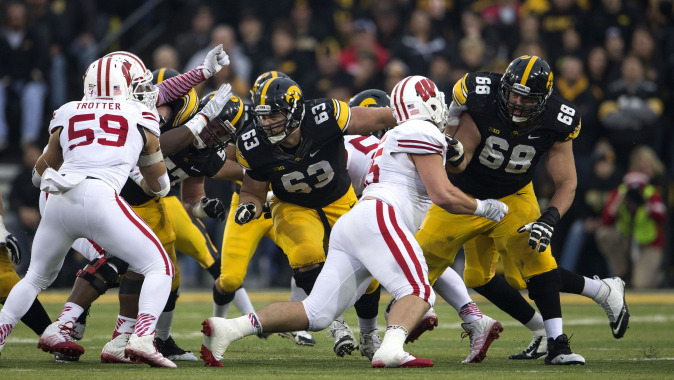 IOWA CITY, Iowa — University of Iowa senior center Austin Blythe has been named to the 2015 Rimington Trophy Watch List. The Rimington Trophy is presented annually to the most outstanding center in NCAA Division I college football.

Blythe moved around the offensive line during the 2014 campaign, starting the first six games of the season at center before moving to right guard after Iowa’s first offensive series against Indiana. The Williamsburg, Iowa, native went on to start one game at right guard before starting the final six games at left guard.

Following a season that saw the Hawkeyes post a 7-6 record after competing in the 2015 TaxSlayer Bowl, Blythe garnered second-team All-Big Ten honors by league coaches and College Sports Madness, while being tabbed honorable mention by league media.

Behind Blythe and the offensive line, the Hawkeye rushing attack amassed 2,120 total yards in 13 games, including a 304-yard performance at Illinois. That same unit was also crucial to the Hawkeye passing game, which accounted for 3,081 yards — the most yards gained through the air since the 2010-11 season (3,052) — and 21 touchdowns.

Blythe and the Hawkeyes open the 2015 season by hosting Illinois State on Sept. 5 inside Kinnick Stadium. Tickets are available for purchase by contacting the UI Athletic Ticket Office at (800) IA-HAWKS, or online at hawkeyesports.com.

For more information on the Rimington Trophy visit: rimingtontrophylist.com.