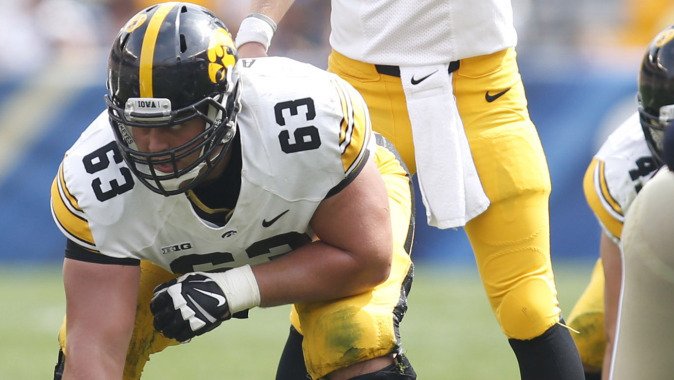 IOWA CITY, Iowa — University of Iowa senior center Austin Blythe has been named to the 2015 Outland Trophy Watch List. The announcement was made Friday by the Football Writers Association of America.

The Outland Trophy, presented annually by the FWAA, honors the nation’s most outstanding interior lineman in college football. Last season, former Hawkeye standout and NFL first-round selection Brandon Scherff won the honor. Iowa has had four players in its history earn the award, tying for third most by any school with Ohio State.

Blythe (6-foot-3, 290 pounds) started all 13 games in 2014 for the Hawkeyes. The Williamsburg, Iowa native started 31 straight games over the past three years and has 35 career starts. In 2013, he proved his versatility moving from guard to center. Last season, Blythe started the first six games at center before moving to guard for the final seven games due to injuries on the Iowa offensive line.

Behind Blythe and the offensive line, the Hawkeye rushing attack amassed 2,120 total yards in 13 games, including a 304-yard performance at Illinois. That same unit was also crucial to the Hawkeye passing game, which accounted for 3,081 yards — the most yards gained through the air since the 2010-11 season (3,052) — and 21 touchdowns.

Following the 2014 campaign, Blythe was named second team All-Big Ten by league coaches in 2014 after earning honorable mention in 2013.

Iowa opens the 2015 season at home against Illinois State on Sept. 5 inside Kinnick Stadium. This will be the first ever meeting between the two schools. Tickets are available for purchase by contacting the UI Athletics Ticket Office at (800) IA-HAWKS and online at hawkeyesports.com.

For more information on the Outland Trophy visit: sportswriters.net.