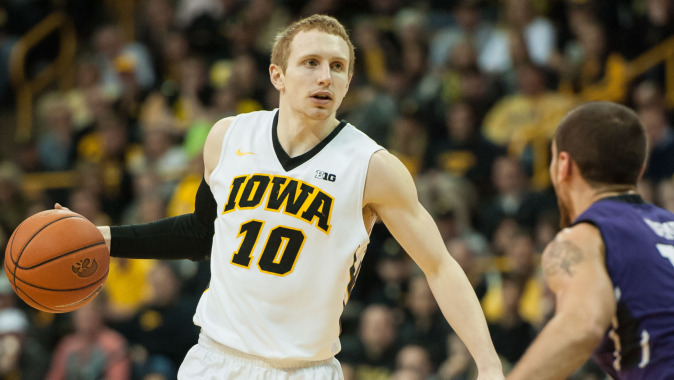 IOWA CITY, Iowa — University of Iowa seniors Mike Gesell and Jarrod Uthoff have been named to the National Association of Basketball Coaches (NABC) Honors Court for the 2014-15 season. The distinction recognizes collegiate basketball student-athletes who excelled in academics during the past season.

In order to be named to the Honors Court, a student-athlete must be an upperclassman academically and maintain a cumulative grade point average of 3.2 or higher.

This marks the second consecutive season that Uthoff has earned the academic honor by the NABC. Uthoff (6-foot-9, 210 pounds) graduated in May with a degree in economics. He was a third-team All-Big Ten honoree, along with earning Academic All-District and all-conference last season as a junior. The native of Cedar Rapids, Iowa, started all 34 games, ranking second in scoring (12.4), rebounding (6.4), steals (1.1), and blocks (1.6), and first in 3-pointers made (54), in helping lead Iowa to a third place Big Ten finish and advance to the NCAA Tournament Third Round. The forward was the only Division I player to amass 55 blocks, 50+ 3-pointers, and 35+ steals.

Gesell graduated from the University of Iowa in three years, earning his degree in finance this past May. Gesell (6-foot-2, 190 pounds) is one of three Hawkeyes to ever amass 800 points, 350 assists, 200 rebounds and 100 steals prior to his senior season (Jeff Horner and Dean Oliver). The native of South Sioux City, Nebraska, led the squad in assists (135) and assist-to-turnover ratio (2.2), ranked third in steals (33) and was fourth in scoring (7.4) a year ago. Gesell will enter his senior campaign ranked eighth at Iowa in career assists (352).