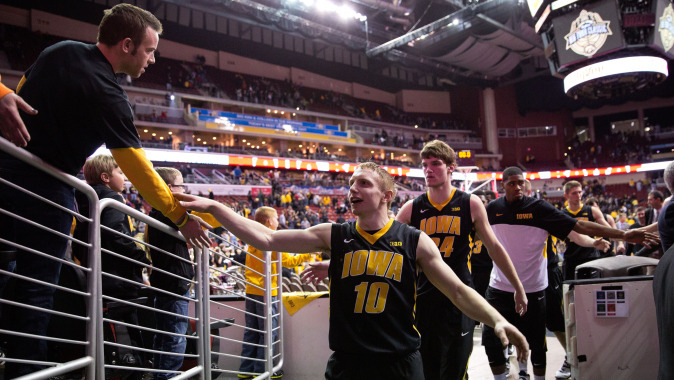 The state’s four NCAA Division I men’s basketball teams will be in action in the same venue for the fourth consecutive year.

The first game of the doubleheader will feature Drake and Iowa beginning at 3:30 p.m. The game will be broadcast on ESPN3.com. Iowa State and UNI will play the second game at 6 p.m., with the game being broadcast on ESPNU.

One of the marquee basketball events in the Midwest, the Hy-Vee Big Four Classic will look to grow its attendance for the fourth straight year. More than 13,000 fans have turned out for each year of the event, including a record 15,124 fans streaming through the Wells Fargo Arena turnstiles in 2014.

Tickets for Hy-Vee Big Four Classic range in price from $25-70. Each institution will have an equal number of game tickets to distribute. Tickets will be good for admission to both games of the doubleheader and will be made available first to each institution’s basketball season ticket holders. Tickets not sold by the institutions will be placed on sale for the general public through the Wells Fargo Arena box office at a date to be announced.

Iowa is in its sixth year under Fran McCaffery after finishing 22-12 and advancing to the third round of the NCAA Tournament in 2014-15. McCaffery has led the Hawkeyes to three consecutive 20-win seasons. The Hawkeyes return four starters from last year’s squad.

Drake is coached by Ray Giacoletti, who is in his third season leading the Bulldogs. Top scorer Reed Timmer (11.6 ppg) is one of three starters returning for the Bulldogs. This will be the 68th meeting between the Hawkeyes and Bulldogs with Iowa owning a 57-10 lead in the series.

Iowa State, which is coming off its fourth straight trip to the NCAA Tournament, will be under the direction of new head coach Steve Prohm. The Cyclones went 25-9 and return four starters from last season.

UNI went 31-4 last season for head coach Ben Jacobson. The Panthers, who won the Missouri Valley Conference Tournament and advanced to the third round of the NCAA Tournament, return two starters. Iowa State and UNI will be meeting for the 49th time with the Cyclones owning a 36-12 lead in the series.

The event’s sponsor, Hy-Vee, Inc., is an employee-owned corporation operating 237 retail stores across eight Midwestern states. With sales of $8.7 billion annually, Hy-Vee ranks among the top 25 supermarket chains and the top 50 private companies in the United States. As representatives of the famous “helpful smile in every aisle” brand, Hy-Vee’s more than 78,000 employee-owners take pride in meeting customers’ desire for quality products, outstanding values and superior customer service. Additional information about Hy-Vee is available at hy-vee.com.