IOWA CITY, Iowa — On this date 23 years ago, the University of Iowa played its first night football game inside Kinnick Stadium. On Saturday, the Hawkeyes turned the lights out on an Illinois State offense that averaged 463.6 yards and 38.3 points a game in 2014.

“It was a good day, a lot of fun out there, and we enjoyed it,” said UI senior defensive end Drew Ott, after the Hawkeyes’ 31-14 dismantling of the No. 2 ranked team in the Football Championship Subdivision (FCS). 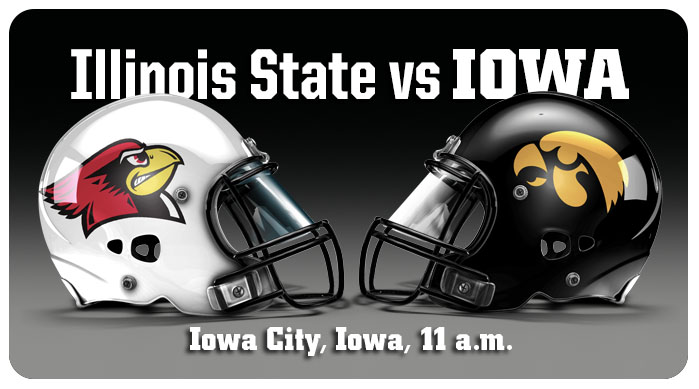 Ott turned in perhaps the most impressive game ever by a defender credited with three tackles. He also forced a fumble, had a quarterback hurry, and sacked Redbird quarterback Tre Roberson twice for a loss of 20 yards.

Last season Roberson accounted for 4,250 yards of total offense and 41 touchdowns. His statistics line Saturday was 5-of-12 passing for 49 yards; he ran the ball 12 times for minus-12 yards.

“We had a good game plan coming in,” Ott said. “We were all juiced up and tired of hitting ourselves (in fall camp). That is what we were going for.”

The Hawkeye defense hit, hit, and hit some more. Illinois State running back Marshaun Coprich was in the same dynamic backfield as Roberson. A year ago, Coprich led all FCS players with 2,274 rushing yards and 27 touchdowns. Against Iowa, he averaged 2.5 yards on 13 carries.

Listening to the Hawkeyes in the postgame locker room, most of the credit went to the defensive line. The starting foursome of Ott, Nathan Bazata, Jaleel Johnson, and Nate Meier helped limit the Redbirds to 79 yards on 37 plays through three quarters.

“We did our job,” Johnson said. “(Defensive line) coach (Reese) Morgan emphasizes to do your job and do the fundamental things right. We focused on that. We weren’t perfect, but we did our job.”

In his first collegiate start, Johnson made four tackles with a quarterback hurry.

Johnson wasn’t the only Hawkeye making his first start on defense. Fifth year senior Cole Fisher wrestled his way into a starting linebacker role during camp and led the team with eight tackles in the season opener.

“The defense made mistakes here and there, it’s going to happen in a first game,” Fisher said. “We will get those cleaned up, but overall, you can’t be too mad with a shutout by the No. 1 defense.”

Indeed. The Hawkeyes were dominant through 45 minutes, leading 31-0 and holding the Redbirds to eight first downs, 30 rushing yards, and 49 passing yards. At halftime, Illinois State ran the ball 15 times for zero yards.

“It was a good first half,” said linebacker Josey Jewell. “The defensive line attacked them, we had leverage, and everybody filled where they were supposed to be. It was an incredible team effort.”

Illinois State finished with 231 total yards (152 coming in the fourth quarter). Statistically it is the best performance by an Iowa defense since a 48-7 win against Northwestern on Nov. 1, 2014. In that game the Wildcats ran 67 plays and gained 180 yards.

“To stop a perimeter game, it’s a team effort,” said UI head coach Kirk Ferentz. “Somebody has got to go set an edge out there, somebody has got to be able to contain it, and then you’ve got to be coming like crazy from the inside. We did a better job of that today, making them bounce a little bit.”

Ironically, the stingy effort came a day after former defensive coordinator Bill Brashier was inducted into the National Iowa Varsity Club Hall of Fame. The 86-year-old former Texan must have appreciated what he saw.

Thousands of other Hawkeye fans certainly did.