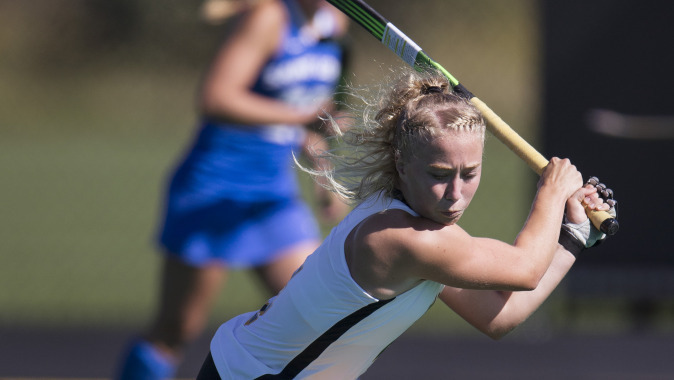 IOWA CITY, Iowa — University of Iowa freshman Makenna Grewe has been named Big Ten Conference Freshman of the Week, the league announced Tuesday. It is the first honor of Grewe’s career.

The San Diego, California, native is the first Hawkeye to earn Big Ten Freshman of the Week honors since Jessy Silfer (Oct. 22, 2013), and the first to earn a conference weekly award since junior goalkeeper Alexandra Pecora was named Defensive Player of the Week on Oct. 28, 2014.

In three games this past week, Grewe scored three goals and recorded six assists, helping the Hawkeyes to victories over Kent State and Saint Louis.

On Sept 12, Grewe scored two goals and recorded two assists in a 7-1 victory over Kent State, her second two-goal game of the year. The Hawkeye forward has scored at least one goal in four of Iowa’s seven games and is tied for third in the conference with six goals on the year.

Grewe and the 15th-ranked Hawkeyes (4-3) return to Grant Field this Friday for their Big Ten opener against Rutgers (4-1). Friday’s contest is slated for a 3 p.m. (CT) start time and will be streamed on BTN Plus.