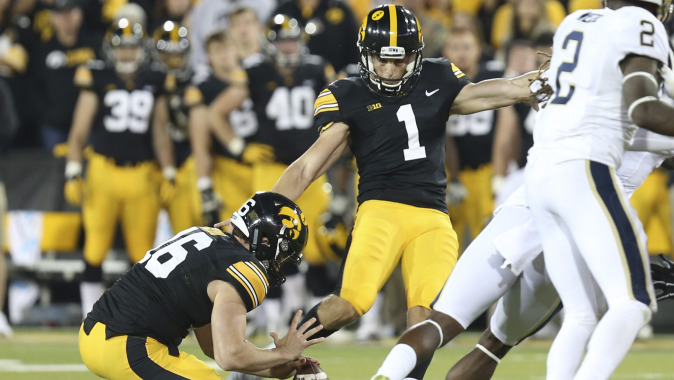 IOWA CITY, Iowa — The irony is too great to overlook.

During the University of Iowa’s second home football game last September, Hawkeye kickers combined to go 1-for-4 on field goals. Marshall Koehn had the first three attempts that day, making from 26 yards, but missing from 35 and 37.

Following that nail-biting 17-13 win against Ball State, Koehn reached out to former UI All-American Nate Kaeding, who made 67 field goals for the Hawkeyes from 2000-03.

Koehn, now a senior, relied on Kaeding’s advice Saturday, kicking a 57-yard field goal as time expired to give the Hawkeyes a 27-24 victory over previously unbeaten Pittsburgh in Kinnick Stadium. Koehn’s career long entering Saturday was 52 yards during a 24-20 win at Pittsburgh in 2014.

“I went through my normal sideline routine,” Koehn said of his late-game heroics. “I took a couple kicks into the net and used positive self-talk; things I got from Nate Kaeding after I struggled last year. He gave me things to focus on.”

Koehn made 11-of-12 field goals over the final 11 games of the 2014 season and he has made all four attempts in 2015. Koehn opened the scoring against Pittsburgh with a 43-yard field goal.

The one he finished the game with was anything but routine. In fact, it is the second-longest field goal in Iowa history, the second-longest in Kinnick Stadium history, and a yard shy of the school-record 58-yarder Tim Douglas made at Illinois in 1998.

The Hawkeyes started their final drive with 52 seconds left and the game tied at 24. Koehn told coaches to get the ball to Pittsburgh’s 40-yard line and he got his wish when UI quarterback C.J. Beathard rushed eight yards and reached the Panther 39 with 0:02 remaining.

Koehn lined up for a field goal. The snap by Tyler Kluver was good, holder Dillon Kidd placed the ball (a whistle blew), and Koehn sent the ball airborne with his right foot.

But Pittsburgh called timeout before Koehn’s attempt fell short by five yards. Meanwhile, Kaeding tweeted “MK can hit this from anywhere inside 65.”

“I was glad they gave me a practice kick,” Koehn said. “We planned on kicking it no matter what, even if they called a time out.”

There would not be another time out…or another miss.

The combination of Kluver-to-Kidd-to-Koehn was again spot on. The field goal was good and bedlam ensued inside Kinnick Stadium.

Another irony is that all week during practice, UI head coach Kirk Ferentz said the Hawkeye two-minute drill was dominated by the defense. The Hawkeyes executed much better against the Panthers, leading to what Ferentz called a “Rob Houghtlin moment” for Koehn.

Houghtlin’s late field goals gave Iowa a 12-10 win against Michigan in 1985 and a 39-38 Holiday Bowl win against San Diego State in 1986. This one might not have been to that magnitude, but it left Iowa with a record of 3-0 to start a season for the first time since 2009.

“We would have liked to have been a little closer, but what a job by Marshall Koehn,” Ferentz said. “It was a fantastic effort on his ball and to keep his composure the way he did was just a fantastic effort.”

It is the first game-winning field goal of Koehn’s career. He prepped at Solon (Iowa) High School, where as a senior, the Spartans outscored opponents by an average of 23 points a game and they won the state championship by a score of 45-7.

“In high school we were pretty dominant and we never had to come down to a field goal,” Koehn said.

The Divison I college scene is more balanced than Class 3A matchups at the state level. On Saturday, Hawkeye fans no doubt thought back to 2008, when another local kicker won another night game against another team from Pennsylvania.

The irony is too great to overlook.