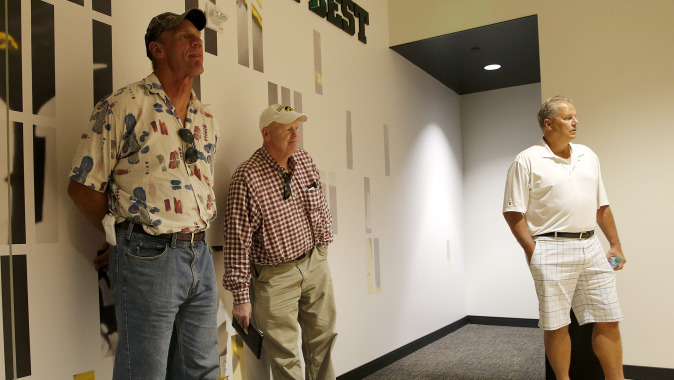 IOWA CITY, Iowa — Mark Bortz, Pat Dean, and Jim Pekar not only played for the University of Iowa football team, their position coach was Dan McCarney.

McCarney will be on the visiting sideline Saturday when North Texas (0-2) plays the undefeated Hawkeyes (3-0) inside Kinnick Stadium; Bortz, Dean, and Pekar will serve as honorary captains.

The message from all three former Iowa defensive linemen was consistent: Watch out.

“I know that guy who is coaching against you tomorrow,” Dean said Friday in the Stew and LeNore Hansen Football Performance Center. “He is going to come at you guys with everything he has. These guys are gunning for you. I would really, really concentrate on doing your assignments and getting it done.”

Bortz, Dean, and Pekar were Hawkeyes in 1981 when the team went 8-4, shared the Big Ten Conference championship, and played in the 1982 Rose Bowl (losing to Washington, 28-0).

“If it wasn’t for Iowa I never would have had a chance to play in the NFL,” Bortz said. “I am greatly indebted to the University of Iowa and the Iowa football program.”

Bortz warned the Hawkeyes not to look ahead to an Oct. 3 conference opener at Wisconsin.

“You need to take it one step at a time and you can’t jump and think of the week ahead,” Bortz said. “You have to take it piece by piece.”

The 1981 Hawkeyes opened the season with an emotional 10-7 win against Nebraska, then fell the next week at Iowa State. “It hurt so bad and you will still wake up 30 years later with nightmares and think about what you could have done differently,” Bortz said.

Pekar is the father of UI sophomore tight end Peter Pekar. Jim Pekar said he still remembers his first game as a Hawkeye and time flies.

“Slow it down, break it down even further than one day at a time,” Pekar said. “It goes so fast. By the time you’re done, packing your car and driving away, you wonder where the four years went. Enjoy each game, leave it on the field.”

Ferentz called the 1981 season “a special moment in Iowa history.”

“The thing that struck us right away in camp when I saw these guys work in practice was that we had an unbelievably tenacious defense,” Ferentz said. “That Rose Bowl team was centered around the best punter in the world, Reggie Roby, our offense was efficient, but our defensive team was an ornery, tough-minded group and it all started up front. These three guys were the hub of the whole deal.”

Bortz, Dean, and Pekar will accompany the Iowa captains to the center of the field for Saturday’s pregame coin toss. They will also be with the Hawkeyes in the locker room before and after the game.