Shortly after Laila Walton was born, she began experiencing excessive vomiting, diarrhea, and nonstop crying. Her local pediatrician diagnosed her with a milk allergy. By age 2, however, Laila was having headaches and vomiting for hours. She was even unable to walk or talk at times and was in terrible pain.

She then was diagnosed with cyclic vomiting syndrome, which is characterized by episodes of severe vomiting with no apparent cause. But Laila’s parents, Rod and Christine, didn’t feel this was the correct diagnosis for their daughter. 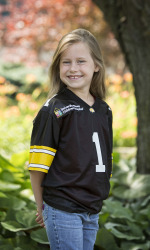 “I had that gut feeling that a mom has where something’s just not right,” says Christine.

“When Laila started having issues and we yet again weren’t getting the answers and results she needed in Cedar Rapids, we decided to bring her to University of Iowa Children’s Hospital,” recalls Christine.

The Waltons met with pediatric nephrologist Patrick Brophy, MD, who told them he’d think “outside the box” for Laila.

“He never promised us he would find a cure or fix the situation, but he did promise that he would help us any way he could,” remembers Christine.

While watching Laila deal with sickness and pain over the years, Christine recognized some similarities between herself and her daughter.

“I suffer from low potassium, and she was exhibiting some of the same behaviors I had as a child,” she says.

Laila began undergoing weekly blood tests to monitor her body’s potassium levels-particularly when she had her episodes.

In December 2014, genetic testing revealed that Laila had a variant of the gene associated with hypokalemic periodic paralysis, a rare genetic kidney disorder, which may be responsible for her symptoms.

“This was huge for Laila because it gave validity to her situation,” says Christine. “And it gave validity to me, because for five years I felt as though I was going crazy.” In patients with this condition, the potassium and sodium in their bodies are at odds. This can cause a chemical imbalance, which often results in headaches, vomiting, and severe muscle weakness.

“When Laila has her episodes, it’s important that the potassium is replaced (in the body) as quickly as possible,” says Christine. “When you’re low on potassium, that affects your heart and lung muscles. These types of situations can be life-threatening.”

The onsets of Laila’s episodes can still be unpredictable. While it has been a long road for the young softball player, Laila’s bravery and toughness have inspired those around her, including her older sisters, Hannah and Emily, and her older brother, Avery.

“She’s had to put up with an awful lot,” says Christine. “But she’s never said, ‘Why me?’ She just deals with it.”

The Waltons are thankful for Laila’s dedicated UI Children’s Hospital care team and the impact they’ve made.

“Our hopes and dreams for Laila is that she can lead the most normal life possible,” says Christine. “The care she’s received has been phenomenal. It’s made a huge improvement on her life and our lives.”