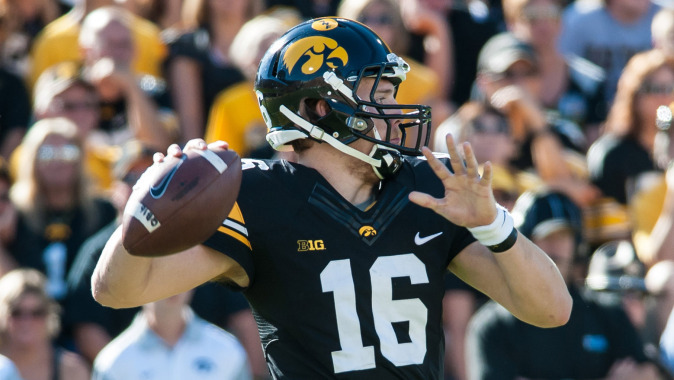 IOWA CITY, Iowa — C.J. Beathard was simply trying to move the chains and put points on the board.

In the process, the junior University of Iowa quarterback completed all 15 of his pass attempts in the first half on his way to a career-high 278 passing yards during the Hawkeyes’ 62-16 win over North Texas on Saturday in Kinnick Stadium.

The total through the air gives Beathard a career high in passing yards in back-to-back weeks. He threw for 258 yards against Pittsburgh on Sept. 19.

“I didn’t think of it during the game,” Beathard said. “You’re not thinking of that when you’re out there trying to get first downs and score touchdowns. You don’t think about being 15 in a row or 20 in a row. That is not crossing your mind.”

Beathard was 15-of-15 for 254 yards and two touchdowns at halftime, with Iowa holding a 35-13 lead. He completed passes to seven different receivers.

Meanwhile, in the locker room, Beathard was being given the silent treatment by teammates, like a pitcher taking a no-hitter into the ninth inning.

The break at halftime allowed members of the media to reflect on Chuck Long’s school record day at Indiana in 1984 when he completed his first 22 pass attempts. Long finished the game by completing 26-of-30 passes for 227 yards. His streak was snapped when Jeff McBain of the Hoosiers intercepted a pass with 10:53 left in the game.

Highlighting Beathard’s fast start were back-to-back completions (on two different drives) to tight end George Kittle and wide receiver Tevaun Smith that covered 124 yards and put 14 points on the board.

“The offensive line was giving me good protection all day, so it was easy to pick coverages out and pick apart defenses,” said Beathard, who was not sacked. “The receivers did a good job getting open and that made it easier.”

“We were going up tempo and they busted the coverage,” Beathard said. “The corner sat and George ran right by him, made a great catch and touchdown.”

An 81-yard bomb to Smith gave the Hawkeyes a 28-3 cushion. It was the longest touchdown pass for Iowa since Jake Duzey scored form 85 yards at Ohio State in 2013.

“(Smith) ran a great route, he weaved the corner in and out and he was open,” Beathard said. “I wanted to put that one on and I didn’t want to miss it.”

Beathard’s consecutive completion streak was halted on is first attempt of the second half when he misfired to Jacob Hillyer. Beathard was 3-for-5 in the third quarter before being relieved by redshirt freshman Tyler Wiegers, who played the final 15 minutes.

“We wanted to go 4-0 out of conference going into Big Ten and that’s where we’re at now,” Beathard said of Iowa’s first 4-0 start since 2009. “Any way you can win is a win. If we continue to get better as each week goes, we’ll do a good job this season.”

Beathard, who is 5-0 as a starter, finished the nonconference slate by completing 75-of-110 for 962 yards and six touchdowns.

The Hawkeyes and No. 22 Wisconsin will battle for the Heartland Trophy on Oct. 3 in Madison, Wisconsin. Kickoff is set for 11 a.m. (CT).