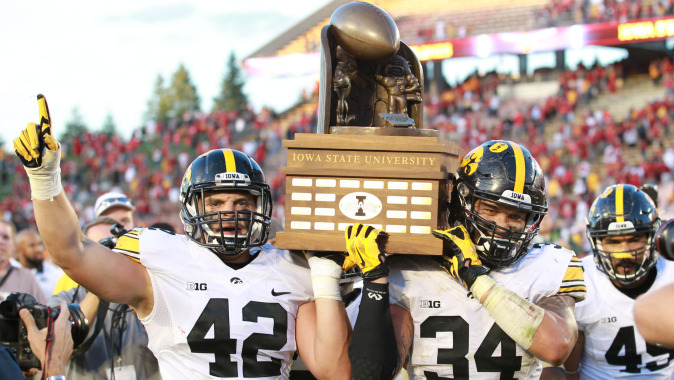 IOWA CITY, Iowa — Growing up in Franklin, Wisconsin, Macon Plewa‘s goal was to play in Camp Randall Stadium more than it was to play for the Badgers.

He will get his wish Saturday when the undefeated University of Iowa football team (4-0) travels to Madison to take on defending Big Ten Conference West Division champion Wisconsin (3-1).

When Plewa was 8 or 9 years old, his grandfather Don VanderVelden, took him to watch Badgers games. VanderVelden lettered for the Wisconsin football team in 1960 and 1961, years when the nationally ranked Hawkeyes posted wins in the series by scores of 28-21 and 47-15.

As Plewa grew, so did his desire of playing in Camp Randall Stadium. That yearning didn’t have anything to do with the Badgers, instead, Camp Randall was the site of the Wisconsin High School Football Championships.

“We fell short two years in a row, so I never got the opportunity to play there,” Plewa said. “I’m glad it’s coming and I’m glad I’ll be in the black and gold. It is going to be fun.”

After high school, Plewa had a chance to walk on at both Iowa and Wisconsin.

“I thought Iowa was a better opportunity,” said Plewa, who still knows Badgers on the current roster.

It is no coincidence that both Iowa and Wisconsin were interested in Plewa, a fullback. In three years as a Hawkeye, he has 11 pass receptions, three running attempts, and a multitude of bone-tingling blocks.

“It is a Big Ten, hard-hitting football game,” Plewa said. “We are two teams that are built the same and look the same, and I expect it to be a very physical game.”

That’s exactly the way Plewa likes it. While most visitors to Camp Randall waste energy trying to block out noise, Plewa is excited to knock a few blocks off.

“Every game I try to lay the wood and get as many as I can,” Plewa said. “There is added incentive playing Wisconsin, especially because they have been kind of the powerhouse in the Western Division and they have been what we want to be. We’re going to try to get after them.”

The last time Iowa played at Wisconsin in football was 2009, a 20-10 win by the Hawkeyes. A junior in high school at the time, Plewa was more interested in the Packer-Lion game the following day.

“I was more of a Green Bay Packer fan, I like the NFL a lot,” Plewa said. “(Wisconsin) was a hometown team, so obviously I cheered for them, but nothing too true.”

Plewa has spent the past five years helping friends and family exchange their red and white Badgers attire for black and gold. That includes his girlfriend and grandfather, both University of Wisconsin graduates.

“My friends are converted,” Plewa said. “My girlfriend will be wearing black and gold, my grandpa is black and gold. There are true friends that stuck with me rather than their home team.”

Since August, Plewa has hounded teammates for tickets to Saturday’s game. His family even purchased a few extras.

Their attire will look consistent.

“If you want these tickets, you’re cheering for the Hawkeyes,” Plewa said. “Everyone is wearing black and gold. I can’t enforce it on game day, but I’m sure my dad will be out there looking.”