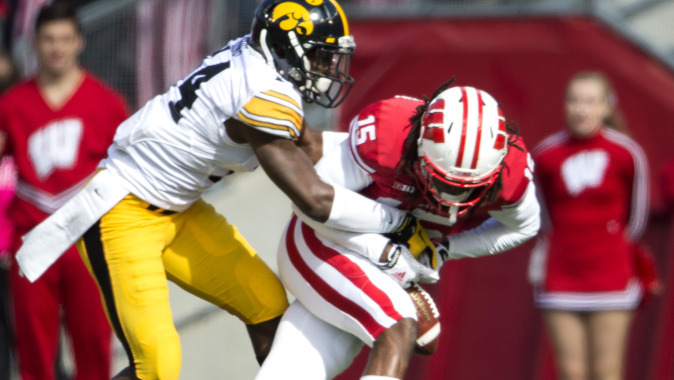 IOWA CITY, Iowa — University of Iowa defensive back Desmond King has been named Big Ten Conference Co-Defensive Player of the Week for his performance in Iowa’s 10-6 win at Wisconsin Saturday.

King is the third Hawkeye to earn the honor this season, as QB C.J. Beathard earned the offensive award following Iowa’s win at Iowa State, and PK Marshall Koehn was the special teams winner following Iowa’s last-second victory over Pittsburgh.

King led Iowa’s defensive effort in the win at Wisconsin as the Hawkeye defense held the Badgers to two field goals in snapping Wisconsin’s 10-game home winning streak. King’s first interception, and 15-yard return, led to the only touchdown in the game as Iowa took a 7-3 advantage.

King leads the Big Ten in both interceptions (five) and passes defended (nine). His five interceptions are the most for a Hawkeye since Brett Greenwood had five in 2010. He also ranks second in the Big Ten in kickoff returns (22.5) and is averaging 18.7 yards on seven punt returns. He is fifth on the team with 29 tackles.