Croston Takes Bull By The Horns 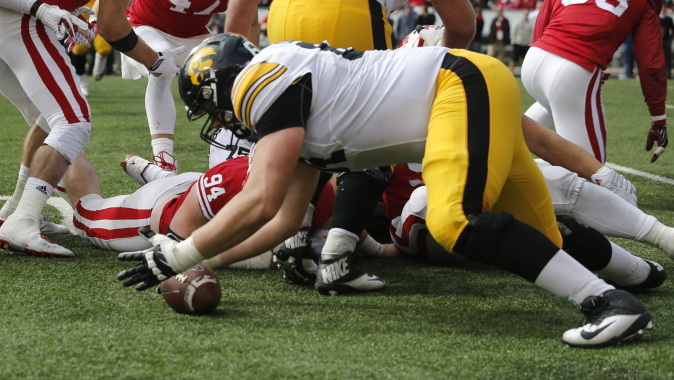 IOWA CITY, Iowa — University of Iowa head coach Kirk Ferentz knows that for his team to be successful, the most experienced Hawkeyes have to play their best football.

After five games, he has plenty of helmets to tap as validation. One is junior offensive line legacy Cole Croston, who had a successful first start Oct. 3 at Wisconsin. He was also part of a key play with three minutes remaining.

Iowa stayed undefeated after five weeks with a 10-6 victory in Camp Randall Stadium. The Hawkeyes were backed up to their own 15 late in the game when a crucial second down play — involving key players from both sides — occurred. Iowa quarterback C.J. Beathard handed the ball to running back Jordan Canzeri, who gained 125 rushing yards on the day. Near the line of scrimmage, Canzeri was stripped of the ball by Wisconsin outside linebacker Joe Schobert, who finished with eight tackles, five quarterback hurries, and three sacks.

“I was out in front of the play and I saw the ball on the ground,” Croston said. “I happened to fall on it and it’s all history from there.”

An injury to UI sophomore Boone Myers, who started the first four games, opened the door for Croston, whose father, Dave, lettered for the Hawkeyes from 1984-86. The younger Croston had fun with his first postgame interview as a starter.

“I had a few people tell me that might have been a game-changer,” Croston said of the fumble recovery. “But I thought I should have maybe picked it up and run. No, just kidding.”

Croston drew a tough starting assignment against a Badger defense that in its last three games allowed three points and averaged 31 rushing yards a game. Iowa finished with 144 yards on the ground.

“The challenge was the guys we had to block,” Ferentz said. “Those interior guys were really good. They were strong, tough players and both their outside backers are good.”

Croston was equally complimentary of his Wisconsin adversaries.

“They played hard the whole game,” he said. “They had really good outside linebackers, had great rushes, and the inside guys were stout. They were a good first Big Ten opponent.”

So what sort of pregame pep talk did Ferentz or his assistants offer Croston?

“(Cole) has been practicing well and we have a lot of faith in him,” Ferentz said. “You believe what you see players do and he has been playing well this year and doing a good job.”

Croston, who attended Sergeant Bluff-Luton High School, joined the Hawkeyes as a walk-on in 2012. He played in two games as a redshirt freshman and saw action in 10 games on special teams in 2014.

“I have played with the rest of the offensive linemen and the whole offense for three years. It felt right stepping in there,” Croston said. “I don’t think there was any awkwardness, we jelled really well.”

There was one thing Croston had never done in his four seasons as a Hawkeye. He had never set eyes on the Heartland Trophy in person…until Oct. 3.

“I had never seen the bull, so carrying the bull off the sideline into the locker room was awesome,” Croston said. “I touched it a few times. You let the seniors carry it, but I got a few touches in there. It was awesome.”

Those postgame touches might not have been possible without Croston’s fumble recovery.