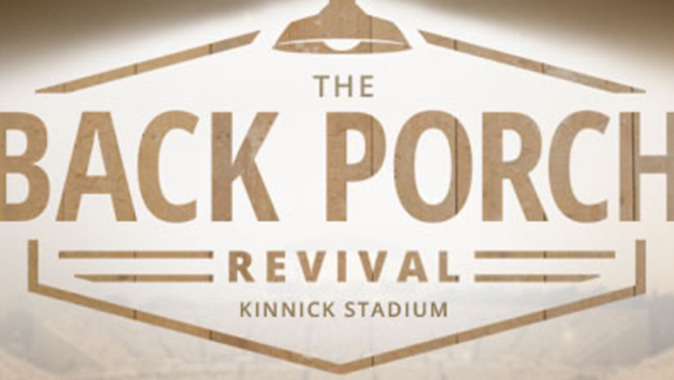 IOWA CITY, Iowa — Dallas Clark is no stranger to “firsts” inside Kinnick Stadium.

In 2002, as tight end for the University of Iowa, he became the first person to score on a pass play of 95 yards. In 2016, thanks to Clark’s brainchild, Kinnick Stadium will host its first concert, The Back Porch Revival, with country music star Blake Shelton as the headliner.

Clark went on to an 11-year all-pro, Super Bowl champion NFL career with the Indianapolis Colts, Tampa Bay Buccaneers, and Baltimore Ravens. The native of Livermore, Iowa, who attended Twin River Valley High School, is now giving back to Iowans.

The Back Porch Revival will be held Saturday, Aug. 27, 2016 – seven days before the Hawkeye football team opens the season by hosting Miami (Ohio).

“The broad stroke of our mission is to help Iowa veterans, Iowa youth, and Iowa disaster relief,” Clark said. “Details of how money gets distributed to what areas is to be determined. I don’t want to dump a bunch of money into something that is already well established or well-funded. Our main focus is to make a difference and have the most impact we can have with the people in Iowa.”

The idea of a fund-raising concert first came to Clark in May, 2008 after tornados tore through Parkersburg, Iowa. The thought was magnified a month later when flooding overwhelmed the state. But Clark was in Indianapolis then, enjoying a 77-catch season, and couldn’t get back to the Hawkeye state to lend a hand.

“I felt helpless and wished I could help,” Clark said. “God put it on my heart and I reached out to Ashton Kutcher and Zach Johnson and told them my idea and how I thought we could make a huge impact.”

Clark pitched the idea to Gary Barta, director of athletics at the University of Iowa. Approval was needed from head football coach Kirk Ferentz since Kinnick Stadium would be occupied for six days leading up to the concert.

“We have all these moving parts that we have to solve, but the neat and good news is that every aspect of this campus was in favor of doing this and wanted to see if we could get it done,” said Mark Jennings, associate director of athletics, donor and patron service. “That helps when everyone is on board.”

A few of the moving parts Jennings was referring to are making sure sound decibels and vibrations did not affect patients at the UI Children’s Hospital. Since tunnels in Kinnick Stadium are too narrow for trucks to reach the field, cranes are needed to lower the stage onto the field. Other things that required ironing out included security, traffic, parking, a ticket system to talk with promoters’ ticket system, alcohol sales, and how to handle concessions.

“I’ll be shocked if we are not sold out and sold out soon,” Jennings said.

Four of the six performers for The Back Porch Revival have been announced. Joining Shelton are Tucker Beathard, Morgan Frazier, and David Ray. Beathard is the younger brother of UI starting quarterback C.J. Beathard.

Clark wants to make the event as electrifying as a 95-yard catch and run…or as stirring as a game-winning 7-yard touchdown reception on fourth-and-goal that also happened that day 13 years ago.

“I’m going to keep working and making sure we’re doing our due diligence to make sure this is the best experience and fundraiser that anyone has ever been to,” Clark said.

It is uncertain if The Back Porch revival becomes an annual event. Clark said they approached the university as it being a one-year event; they will reconvene after the dust settles.

“Right now we’re putting all our eggs in one basket and we’re approaching it as it’s a one-and-done thing, but you never know,” Clark said. “It has never been done before so who knows how it will go?

The Back Porch revival will be the third unique event in Kinnick Stadium during a 14-month span. On June 27, 2015, Kinnick Stadium hosted “Movie Night,” with 3,000 attending a showing of Remember the Titans that was projected on the south scoreboard. On Nov. 14, 2015, the Hawkeyes are scheduled to wrestle Oklahoma State in a potential attendance-shattering event called “Grapple on the Gridiron.”

“The athletic department is in a mode that instead of saying no it says, ‘Well, let’s see if we can work this out,'” Jennings said. “It will be fun.”