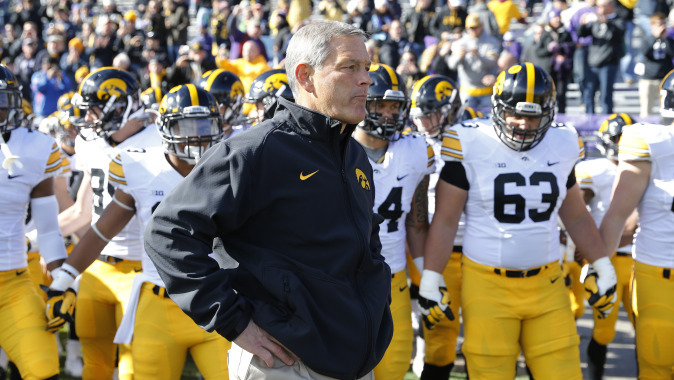 IOWA CITY, Iowa — University of Iowa head football coach Kirk Ferentz is one of 22 coaches named to the American Heart Association Paul “Bear” Bryant Awards Watch List for the 2015 Coach of the Year. This prestigious award honors excellence in college football coaching while raising funds to fight heart disease and stroke. The winner will be announced Jan. 13, 2016, at a live ceremony in Houston.

The 22 coaches on this year’s watch list are (in alphabetical order):

In December, five to 10 finalists will be announced. Finalists will attend an awards banquet Jan. 13, 2016, at the Hilton Americas Houston, where the winner will be announced live. The Paul “Bear” Bryant Coach of the Year Award is the only college coaching honor determined after all bowl games are concluded and is voted on by the National Sportscasters and Sportswriters Association. The 2014 winner was Gary Patterson of TCU.

Ferentz has guided the Hawkeyes to a 7-0 record to start the 2015 season. It marks the second time Ferentz has started a season 7-0 (2009), and is the fifth time in school history. The Hawkeyes are one of two FBS schools to post two road victories over AP ranked opponents (Alabama), with Iowa winning at No. 18 Wisconsin (10-6) and No. 20 Northwestern (40-10). Ferentz has amassed 122 wins as a member of the Big Ten Conference, tying Michigan’s Lloyd Carr for eighth all-time (122). Ferentz has 71 Big Ten wins, the ninth most by a head coach in the history of the league.

The Bryant Awards presented by Marathon Oil Corporation has raised over $6 million in the past 29 years to fund research, advocacy and educational programs across the country that are necessary for the prevention and treatment of cardiovascular disease and stroke.

Marathon Oil Corporation has served as the presenting sponsor of the Bryant Awards for the past eight years, underscoring the Company’s commitment to health and wellness and supporting initiatives that promote the wellbeing of workers and their families both on and off the job. The Company also values the communities in which its employees live and work and strives to cooperate with local community leaders to recognize and advance important public health initiatives that promote the common good and protect the public.

For more information, or to purchase tickets or a table for the event, contact Jimmy Comerota at 832-918-4009 or visit bryantawards.com. Funds raised benefit research, community education and outreach programs of the AHA.