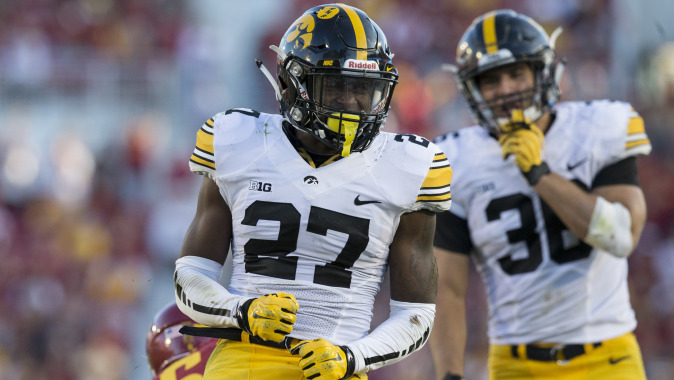 IOWA CITY, Iowa — University of Iowa senior defensive back Jordan Lomax is one of 22 quarterfinalists for the 2015 Lott IMPACT Trophy. The announcement was made Friday by the Pacific Club IMPACT Foundation, sponsors of the annual award.

The winner will be announced at the 12th annual Lott IMPACT Trophy Banquet, Dec. 13 at the Pacific Club in Newport Beach, California. The Pacific Club IMPACT Foundation will make a $25,000 donation to the general scholarship fund of the winner’s university, and $5,000 to each of the schools of the runner-ups. Iowa linebacker James Morris was a finalist for the award in 2013.

The 22 quarterfinal candidates include 14 linebackers, five defensive linemen and three defensive backs. Lomax is one of seven quarterfinalists from the Big Ten Conference. For more information on The Lott Trophy, visit: LottImpactTrophy.org.

Lomax earned honorable mention All-Big Ten honors from league coaches a year ago after recording 92 tackles. He started 12 games and played in all 13 contests. He led the Hawkeyes with six pass break-ups, while also collecting one interception and a forced fumble. Lomax earned the team Hustle Award for both defense and special teams in 2014.

The graduate of DeMatha Catholic High School earned academic All-Big Ten honors each of the past two seasons. The economics major was named a Capital One District 6 Academic All-American a year ago and is a member of the UI’s Dean’s List. Lomax carries a 3.49 grade point average and has been a member of Iowa’s Leadership Group for the past three seasons.

Named after Pro Football Hall of Fame member, Ronnie Lott, The Lott IMPACT Trophy is awarded to college football’s Defensive IMPACT Player of the Year. Founded in 2004 by The Pacific Club IMPACT Foundation, The Lott Trophy is the first and only college football award to equally recognize athletic performance and the personal character attributes of the player. The Lott Trophy is given to the player who exhibits the same characteristics Lott embodied during his distinguished career: Integrity, Maturity, Performance, Academics, Community and Tenacity.

Voters for the award include selected members of the national media, previous finalists, the Board of Directors of the Pacific Club IMPACT Foundation and a distinguished group of former college football head coaches. To date, the Foundation has donated more than $1 million to various charities throughout the country.

Tickets for Iowa’s three remaining home games can be purchased online at hawkeyesports.com, over the phone by calling 1-800 IA-HAWKS, or at the UI Athletics Ticket Office in Carver-Hawkeye Arena. There is a $25 youth ticket available for games versus Maryland and Purdue (Nov. 21).