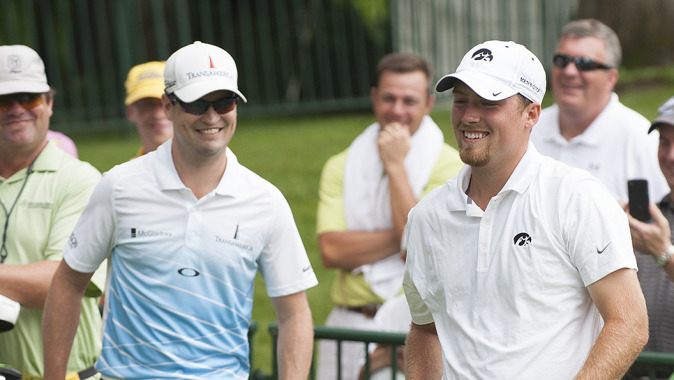 IOWA CITY, Iowa – – PGA TOUR golf professional and Iowa native Zach Johnson, the British Open champion who is ranked 10th in the 2015 World Golf Rankings, will serve as honorary captain Saturday as the 10th-ranked Iowa Hawkeyes host Maryland at Kinnick Stadium (2:36 p.m., ABC/ESPN2). Johnson enjoyed an outstanding year on the PGA Tour, claiming the second major of his career with his British Open title at St. Andrews. He entered the final round of the 144th Open Championship trailing three players by three strokes, but stormed back with a final-round, 6-under 66 to win in a four-hole aggregate playoff. Johnson improved his playoff record to 4-1 and in the process became the 14th player to win the Masters Tournament and Open Championship in a career. He is the sixth player to win majors at Augusta and St. Andrews, joining Jack Nicklaus, Tiger Woods, Seve Ballesteros, Nick Faldo, and Sam Snead.

Johnson has 12 PGA Tour career victories, including wins in eight out of the last nine years on tour, 67 top 10 finishes, and 143 top 25 finishes. He earned a second place finish at the 2015 John Deere Classic, just one week prior to his British Open win. In PGA Tour rankings, he was seventh in scoring average, eighth in driving accuracy percentage, and eighth on the money list.

Johnson recorded 10 top-10 finishes in 25 starts last year, highlighted by a five-week stretch that yielded four top-six showings. He placed sixth in the FedExCup standings, the fourth time he’s finished inside the top 10, and tied for ninth at The Masters. Johnson earned a spot on the USA Presidents Cup team, posting a 3-0-1 mark in his four matches in the American team’s 15½-14½ victory in South Korea.

Johnson is a native of Cedar Rapids, and a 1998 graduate of Drake University. In July, 2010 he established the Zach Johnson Foundation, which benefits children in need in the Greater Cedar Rapids area. The Foundation’s premier event is the Zach Johnson Foundation Classic, a tournament that features PGA Tour players, as well as some of the game’s future superstars. The event has been held annually since 2011.

Johnson will accompany the Iowa captains to the center of the field for Saturday’s pregame coin toss. He will also be with the Hawkeyes in the locker room before and after the game.