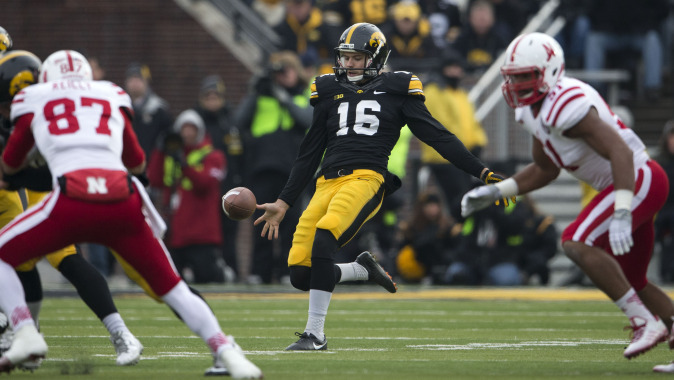 AUGUSTA, Ga. — The Augusta Sports Council has announced the nominees for the 2015 Ray Guy Award, which identifies the nation’s top collegiate punter. Among the 79 candidates is the 2014 Ray Guy Award is University of Iowa senior Dillon Kidd. Candidates were nominated for the award by their school’s sports information department.

Kidd is averaging 44.8 yards on 33 punts through seven games. His 44.8 yards per punt ranks third in the Big Ten and 18th nationally. The native of Deerfield Beach, Fla., has 10 punts of 50-plus yards, which ties for fourth in the Big Ten.

The list will be narrowed to ten semifinalists to be announced on Nov. 13. Following the semifinalists announcement, a national body of Football Bowl Subdivision (FBS) sports information directors, coaches, media representatives and previous Ray Guy Award winners will vote for the top three finalists, who will be identified on Nov. 23. The voting body will then cast ballots to select the winner.

The presentation of the Ray Guy Award will be featured live on ESPN during The Home Depot College Football Awards, Thursday, Dec. 10.