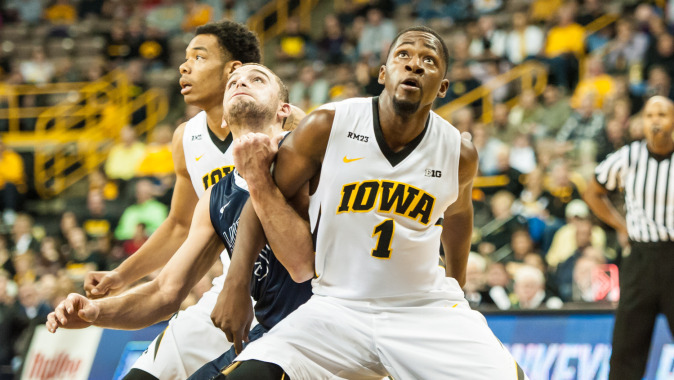 Q. You knew they were good. Were they even better than you expected?
COACH McCAFFERY: No, I think they were about what we thought they’d be. Really impressive team on film. Very well-coached team. Share the ball. Rebound. They’re a big team. They don’t have a huge four, but everybody’s 6’6″ and strong. Jansen is a handful. They got a great point guard.

Tom has all the pieces that you need. I would like to think we would have rebounded better than we did. If you look at the stats, that’s the one area that’s disappointing. We missed 39 shots. We only get 10 of them back. I think that’s where we lost.

You can look at turnovers, shots made, threes made, all that. I think the game right there is where we lost it.

We didn’t give them a ton of free throws. They live at the free-throw line. They’re very good getting there. We kept them off the free-throw line. Held them under 10 threes, things you have to do against a team like this. But they got us on the glass. That’s how they won.

Q. What allowed them to right the ship after they started off real slow?
COACH McCAFFERY: They just kept doing what they always do. I thought our intensity level was really good. As we tired a little bit, we broke down a few times. We overhelped on Spencer’s penetration. Wrong guy help one time. Gave up a high-low pass. There were a few breakdowns.

They made six threes in the first half because we kept over-rotating to the ball, which we had been working all week on not doing. But that happens sometimes, especially when you have an experienced team with some inexperienced guys on the floor with a little bit of fatigue.

To their credit, they kept moving the ball. Even early, when we had them locked up, they were getting good shots. They were a little more contested and they missed them.

But we were stuck on eight there for a long time.

Q. Offensively in the second half you found some things you liked. Did you wait too long to get guys like Gesell and Clemmons driving to the basket?
COACH McCAFFERY: No. They both know they can do that all the time. I thought Mike had an uncharacteristic first half. He was 1-8. He got it to the rims a few times, didn’t finish. Took a few jumpers, didn’t go in. Clemmons took the first possession of the game, shot a little floater.

I think our ability to get to the rim late the way we did was a little bit of fatigue on their part. Tom took some of his key guys out at the 11-minute mark and tried to give them a little bit of rest because he knew he was going to ride those guys down the stretch. We kept running, the game was intense. They don’t want to give up a three. They got the lead. There’s a little more space. We mixed our motion and set plays so we were able to get better shots.

Q. The play at the end that won it, looked like you guys played good defense…
COACH McCAFFERY: You just have to tell Jansen, you know what, great play. We pressed up on everybody. We made him use all the clock. He made a contested shot. You don’t want to foul him. You don’t want to give him an uncontested layup. If they’re going to beat you, it’s got to be a tough two. He made a tough two.

Q. A loss is a loss but it’s only an exhibition. When you start on Friday, you’re still 0-0.
COACH McCAFFERY: There’s two ways to look at this game. You can schedule it or not, okay? We could have found a team that won eight games last year very easily. We scheduled a team that won 31 games. Most teams won’t play them, okay?

But I felt like we needed a game like this right here. When you look at our schedule, we play next Friday and Sunday. We got Marquette, Iowa State. You look at who we have, Florida State. The tournament in Orlando. We better play somebody good who is going to expose some of our weaknesses as opposed to you win by 25 and you don’t really know where your weaknesses are yet.

The only downside is you can’t get your young guys in to get their feet wet a little bit more. Yeah, Dale was terrific. I’m so proud of Dale. Ellingson was terrific. I thought Baer was great. You know, Ahmad, Dom, Christian, those guys are going to be fine. But I put Dom in, he didn’t play well, I didn’t go back to him. Would have been nice if I could have gotten back to him. Same with Ahmad. I went with the other guys because it was a close game.

Q. When you started to come back in the second half…
COACH McCAFFERY: Baer, Ellingson and Jones. He also had some of his subs in. We were able to match up physically a little bit better than we would have. That would have been a tough lineup if he still had Jansen in the game. He did for a little bit. Baer was fronting, working his tail off like he always does.

Q. Did you see anything out of the younger guys that might help you solidify the rotation?
COACH McCAFFERY: It’s great to see Brady Ellingson shoot the ball the way he did. It is great to see Dale shoot it and get to the offensive glass. We didn’t have a ton of offensive rebounds. He got a putback when we were struggling offensively. So to see those guys not be afraid to shoot the ball, make big baskets.

Like I said, when Dale figures out our offense a little bit better, he’s going to be terrific. Then Baer is rock solid. He’s going to be fine. There’s eight.

Q. You talked about the rebounding a little bit. Do you have any sort of explanation for why the team was unable to kind of establish itself physically?
COACH McCAFFERY: Well, a lot of times you can sit here and over-analyze what we didn’t do. Sometimes you have to give credit to the other team, what they did do.

They blocked out extremely well. They’re big and strong. I thought Jarrod’s energy level was not where it needs to be. We talked to him about that. Nobody spends more time in the gym than Jarrod Uthoff. Seemed like he had his legs underneath him. I want to see him play with more energy and more reckless abandon. I think that’s a test for us in the next week, to get him to be more aggressive at both ends.

Q. Redshirt for Moss?
COACH McCAFFERY: Redshirt for Moss. Moss was not here in the summer. I think in fairness to him, he was behind when we started practice. We got back here, take the pressure off him, let him study it, figure it out. He’s going to be really good.