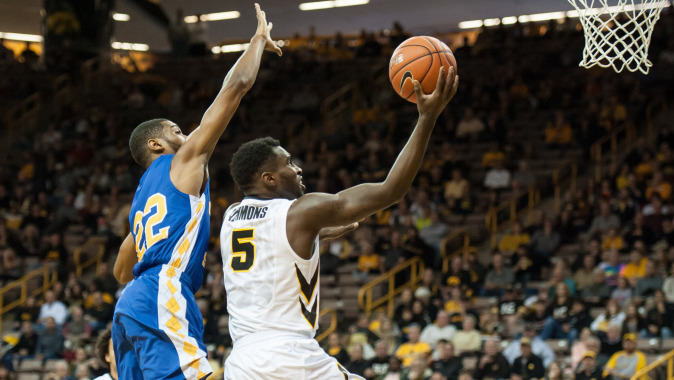 Q. Fran, you were able to get a lot of players a lot of playing time. How good do you think that is for your team, not only in the short-term but in the long-term?
Fran McCaffery: Well, I think it’s critical for any team because when you have young players, you’ve got to be able to let them get in the game, make a mistake, stay in the game. If every possession in the game was in the balance, it’s hard to do sometimes. You kind of go back to your veterans. Your backup misses a shot, kicks one off his foot, doesn’t get back in; it doesn’t do anything for his confidence. So today we were able to leave those guys in, and a lot of good things happened.

If you look at the numbers, defensively we had a little problem in the second half trading baskets, and we got that corrected. But that’s the critical thing at this point in the season.

You look at the rest of our schedule, if these young guys are going to get ready, they’ve got to be on the floor, they’ve got to stay in, and they have to have some success. That’s how you build the confidence.

Q. When you look at your schedule, the next six games could all be pretty tough games?
Fran McCaffery: Yeah, they are. They’re all going to be tough games. So we’ve got some veterans and we’ve got some young guys that have stepped up, and we’ve played four games now, so that helps. I feel good about where they are.

Q. Mike with 21 assists in two games, he’s just kind of showing the play making and quality leadership he really has?
Fran McCaffery: I mean, he’s really pushing it hard. He’s got his head up. He’s making real good decisions. You know, when your big guys are running, you want to load them up or they’ll stop running. He knows that. He understands that. We’ll keep throwing it to him.

Q. How about Dom stepping in there to start and how he played?
Fran McCaffery: I’m really proud of him, the way he’s played, the energy level that he’s played with, and his ability to make plays off the dribble and also affect the game at the rim with rebounding and his leaping ability and his length. He seems to be playing with a lot of confidence, shooting the ball well, knocks in three threes today.

But I thought the other night, with him coming in, that was really critical, too, his performance. It’s great to see him playing that way. He’s kind of doing what we thought he’d be doing at this point.

Q. Brady Ellingson, I know you guys have seen some pretty good stuff with him in practice.
Fran McCaffery: The thing with Brady is he’s an incredibly efficient player. He back cuts, he curl cuts. You look at him as a jump shooter, but he makes a lot of lay-ups because he always gets open. He’s got a knack for getting open, and he handles the ball and he’s got dribble moves much more than people think. They think he’s a standstill spot-up shooter. That’s not what he is. I mean, he can do that, but he’s got a game. He knows how to play. He’s a tough kid who’s shown that he can defend. He sticks his nose on the glass and blocks out, and that’s going to be critical because if we play three guards and he’s in there, he’s got to be able to rebound.

Q. How much does it help the coaching aspect of it when you have game tape to show these guys and to correct the errors versus what they do in practice?
Fran McCaffery: Well, it’s completely different. I mean, it’s great to be able to show them practice footage, but the games are different. People respond differently in those situations. You know, we’re trying to make assessment, you look at a guy like Fleming, he couldn’t get anything to go down. He had a couple turnovers. But the thing that you see is he’s going to fight you. He’s going to stick his nose in there and rebound and body up and put his head down and drive, and those are the kinds of things you see in games, and you want to see if they have that in them.

Q. And then your rotation, do you see that continuing to change between now and the start of Big Ten season?
Fran McCaffery: Yep.

Q. Is it solidified?
Fran McCaffery: It’s going to be ongoing.

Q. Talk about Dale Jones, the way he can shoot and the way he can rebound, but how do you view his defensive skills?
Fran McCaffery: Well, he’s getting better. I mean, he’s always kind of viewed himself as an offensive player. I mean, that’s what he is. The thing that has always been impressive to me is that he will rebound, as well. If you score and rebound, if you think about it, that’s probably going to keep you on the floor on most teams. The problem is at this level, you’re going to be guarding a killer, and you’d better be able to stop him. So what he’s done is really concentrated on improving his footwork, getting down in the stance, staying there. The next phase is anticipating screening action when it’s coming his way and getting through and communicating, are we switching or are we not, because we’ve been doing a lot of switching, and make sure that if he’s in the post that he can fight the post. He’s got a 7’1″ wingspan, so that’s obviously a great advantage to him at the defensive end.

But just to watch him score the ball the way he did, I mean, the thing got to remember about him, or the thing I try to get him to remember about himself, is don’t just be a three-point shooter. Just like I said about Brady, I mean, the dunk he missed there, that was — he flashed in the lane, he curled, caught it, and then went and attacked. The other time he shot faked from the top and drove it all the way and finished. That’s what I need him to do because he is a scorer who happens to be a really good three-point shooter.

Q. Are you trying to hold off on playing Hutton?
Fran McCaffery: I’m being a little careful with that, whether we’re going to burn his year or not.

Q. What’s kind of his thought on that right now?
Fran McCaffery: He’s either way. He’s good either way.