King Named Semifinalist for Player of the Year Award 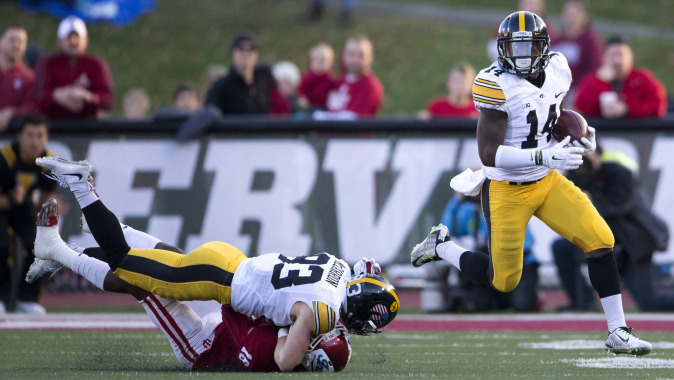 IOWA CITY, Iowa — University of Iowa defensive back Desmond King has been named one of 15 Players to Watch for the Walter Camp Football Foundation 2015 Player of the Year. The award is the fourth-oldest college football award in the nation. The Player of the Year Award is voted on by the 129 Football Bowl Subdivision head coaches and sports information directors. A list of five finalists will be announced Wednesday, Dec. 2, with the winner being announced on ESPN on Thursday, Dec. 10.

King (5-foot-11, 200-pounds), is a junior from Detroit, Michigan (East English Village HS). He leads the nation with eight interceptions. King has multiple interceptions in two games, with two thefts in wins over Pittsburgh and Wisconsin. The eight interceptions ties the Iowa single-season record (Lou King, 1981; Nile Kinnick, 1939). King has 11 career thefts, which ties for eighth best at Iowa.

King was named the Jim Thorpe national Defensive Player of the Week and Big Ten Defensive Player of the Week following Iowa’s win at Wisconsin. He is also the first Hawkeye with multiple multi-interception games in a season (Pittsburgh and at Wisconsin) since Tyler Sash in 2009. He had an 88-yard touchdown return in Iowa’s win over Maryland, the second touchdown of his career (Indiana, 2014).

King is also Iowa’s primary kickoff and punt returner. He averages 12.7 yards on punt returns and 25.1 yards on kickoff returns to rank third in the Big Ten in both categories.

The list of semifinalists includes just two defensive players; including King and Oklahoma State DL Emmanuel Ogbah. There are five quarterbacks, five running backs, and three wide receivers among the 15 semifinalists. Ohio State RB Ezekiel Elliott is the only other candidate from the Big Ten Conference.

Iowa closes the home season Saturday, hosting Purdue in Kinnick Stadium (11:01 a.m., ESPN2). Tickets are avaialble online at hawkeyesports.com, in person at the UI Athletics Ticket Office in Carver-Hawkeye Arena, or by calling 1-800-IAHAWKS. A $25 youth ticket is available for the Purdue game.