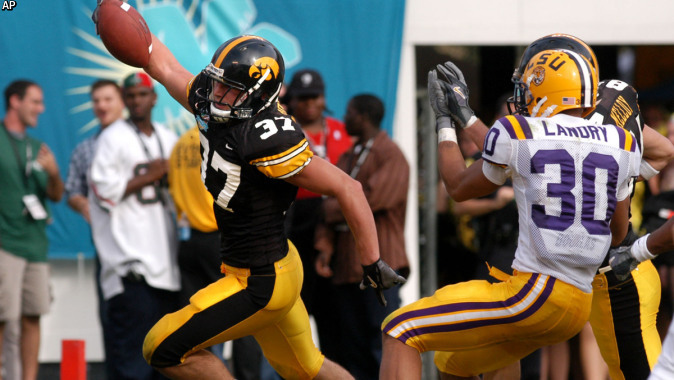 IOWA CITY, Iowa – – Former University of Iowa defensive back Sean Considine will serve as honorary captain Saturday as the fifth-ranked Iowa Hawkeyes host Purdue in Kinnick Stadium (11:01 a.m., ESPN2) in the final home game of the season. Considine lettered for the Hawkeyes from 2001-04, playing free safety after joining the team as a walk-on in 2000. He played in 48-of-50 games during his career, missing two games as a senior due to injury.

Considine earned honorable mention All-Big Ten recognition as a senior. He earned the Hayden Fry “Extra Heartbeat” Award in his final season and was named a Permanent Team Captain. He earned the Hustle Team Award three times during his Hawkeye career.

The native of Byron, Illinois, recorded 157 career tackles, to go with six pass interceptions and four recovered fumbles. As a standout on special teams, he collected five career blocked kicks. He returned a blocked punt for his second career touchdown in the Capital One Bowl win over LSU.

Considine was the first player selected in the fourth round of the 2005 NFL Draft, being selected by the Philadelphia Eagles. He played in the NFL for eight seasons, recording 259 career tackles, four interceptions and 14 pass break-ups.

Considine will accompany the Iowa captains to the center of the field for Saturday’s pregame coin toss. He will also be with the Hawkeyes in the locker room before and after the game.

Tickets are available for Saturday’s contest, at hawkeyesports.com, in person at the UI Athletics Ticket Office in Carver-Hawkeye Arena, or by calling 1-800-IAHAWKS. A $25 youth ticket it available.