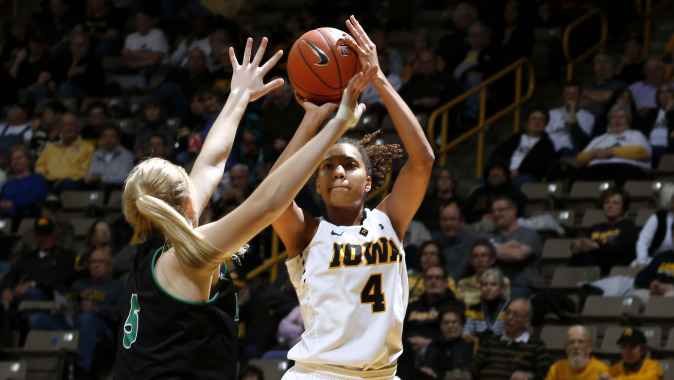 THE SETTING
No. 21/25 University of Iowa women’s basketball team travels to Austin, Texas, to compete in the Lone Star Showcase.

GAME COVERAGE
? Hawkeye fans can listen to each Lone Star Showcase contest online on Hawkeye All-Access and watch on YouTube HERE.
? Brent Balbinot and Kathryn Reynolds will call the action.
? Balbinot is in his 12th season as Iowa’s play-by-play voice, while Reynolds is in her first providing analysis.
? Reynolds, a member of the infamous Core Four and team captain for the Hawkeyes in 2014-15, is pursuing a law degree at the University of Iowa.
? Links to audio and live stats are available on the women’s basketball schedule page at hawkeyesports.com.

WRIGHT STATE RUNDOWN
? Wright State, a team picked to finish second in the Horizon League, owns a 4-1 record. Its lone loss was to 2015 NCAA Tournament Second Round participant Miami (FL), 80-67.
? The Hawkeyes lead the Raiders, 1-0, in the all-time series. Iowa won a neutral site contest, 87-41, in 1991-92.
? Wright State has made the postseason in four of the last five years (WBI in 2011 and 2012, NCAA Tournament in 2014, and WNIT in 2015).
? The Raiders average 83 points per game and have three players who average double digits in scoring, including Kim Demmings (24.4 points per game), Riche van der Keijl (10.4 points per game), and Mackenzie Taylor (10.2 points per game).
? The roster, comprised of two seniors, three juniors, two sophomores, and six freshmen, is led by sixth-year head coach Mike Bradbury.

SCOUTING GEORGE WASHINGTON
? Iowa meets its first ranked opponent in No. 23/24 George Washington. The Colonials, picked to win the Atlantic 10 this season, bring a 3-1 record into tournament play.
? George Washington’s lone loss came to a nationally ranked opponent in No. 10/13 Stanford, 84-63, on the road.
? The Colonials lead the Hawkeyes, 1-0, in the all-time series. George Washington won the lone game of the series at home, 78-64, in 2000-01.
? George Washington averages 71.8 points per game. Jonquel Jones is averaging a double-double with 15.0 points and 11.8 rebounds per game, while Caira Washington averages 15.8 points and 9.3 rebounds per contest.
? Fourth-year head coach Jonathan Tsipis leads a roster made up of five seniors, three juniors, five sophomores, and two freshmen.

A LOOK AT HOUSTON
? Houston is 1-2 entering the Lone Star Showcase, most recently defeating Louisiana-Lafayette, 52-51.
? The all-time series is tied, 1-1, between Iowa and Houston. The Hawkeyes won the first meeting, 59-44, at a neutral site in 1993-94, before the Cougars evened the series with a win at Iowa, 70-64, in 2003-04.
? Houston was picked to finished last in the American Athletic Conference after finishing last season with a 1-17 league record and a 6-24 mark overall.
? The roster, comprised of five seniors, five juniors, two sophomores, and three freshmen, are led by second-year head coach Ronald Hughey.

4-0 START STATS
? Iowa has won its first four games of the season for the third-straight year.
? The Hawkeyes have started 4-0 15 times in program history.
? The best start in program history occurred in 1987-88, when the Hawkeyes won their first 22 games of the season. Iowa ended the year with a 29-2 record overall and the outright Big Ten Championship with a 17-1 mark in league action. The Hawkeyes also advanced to the Sweet Sixteen that season.

CAREER DAYS LEAD IOWA TO 1ST ROAD WIN
? Iowa defeated its UNI last Sunday to record its first road win of the season, 80-65, in Cedar Falls, Iowa.
? Sophomore center Chase Coley had the best game of her career, notching her first ever double-double (16 points, 14 rebounds) and setting career-highs in points (16), rebounds (14), assists (5), and blocks (4).
? Junior Alexa Kastanek had a perfect afternoon on the floor, hitting 8-of-8 field goals. She set career-highs in points (22) and 3-pointers made (4). She was 4-for-4 from beyond the arc in the contest.
? Junior guard Ally Disterhoft also reached double figures with 15 points in the win. She leads Iowa with 16.8 points per game and has reached double figures in all four contests this year.
? The 15-point win at UNI is the largest margin of victory over the Panthers in Cedar Falls since 1978-79 when the Hawkeyes won by 35 points, 90-55.

POLL POSITION
? No. 21/25 Iowa is represented in both the Associated Press Top 25 Poll and USA Today Coaches Poll for the first time this season in the week three rankings release.
? The Hawkeyes went from receiving 10 votes in the AP Top 25 to a No. 25 national ranking with 74 votes.
? Iowa also moved up to No. 21 nationally in the week three release of the USA Today Coaches Poll. The Hawkeyes were No. 23 in the preseason and week two release.

SEASON COMPARISONS
? In 2014-15, the Hawkeyes set a single season record with a 79.5 points per game average and averaged 36.4 rebounds per game with a -4.6 rebounding margin.
? Through four games played in 2015-16, Iowa is averaging 80.2 points and 45 rebounds per game. The Hawkeyes are also outrebounding their opponents by an average of 10 per game.

ON DECK
The Hawkeyes wrap up their five-game road stint with a B1G/ACC Challenge contest at Virginia on Dec. 2. The game, which begins at 7 p.m. (CT), can be watched on Cavaliers Live at virginiasports.com.

Iowa returns to Mediacom Court in Carver-Hawkeye Arena on Dec. 6 for a contest against Robert Morris at 1 p.m. (CT).