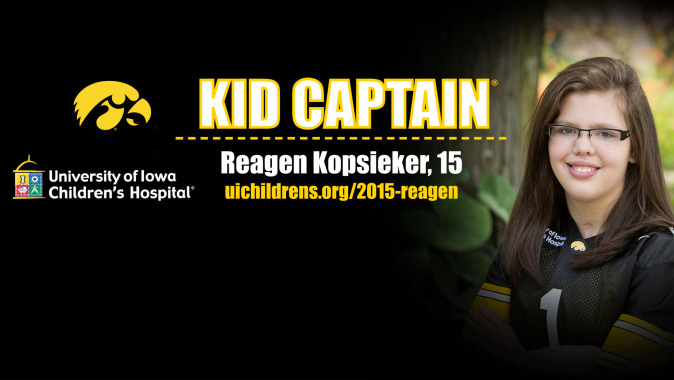 IOWA CITY, Iowa — Reagen Kopsieker is a spunky, spirited 16-year-old who loves to spend time shopping and on social media.

Shortly after her birth, however, her parents worried she wouldn’t live to see her first birthday.

Reagen had trouble breathing and her heart rate was dropping immediately following her birth via emergency Caesarean section. After three days at her local hospital, doctors were still concerned about Reagen’s heart and suggested she see a pediatric cardiologist for an ultrasound. Reagen’s parents, Dan and Natalie, chose to send their daughter to University of Iowa Children’s Hospital.

Reagen was rushed to the Neonatal Intensive Care Unit, where she was diagnosed with hypoplastic left heart syndrome — a rare and complex birth defect where the left side of the heart is substantially underdeveloped, and cannot effectively pump blood to the rest of the body.

“It was absolutely devastating,” recalls Natalie. “There are no words to describe how you feel when you’re told your 3-day-old baby has slim chances of living without some corrective action. It’s absolutely a parent’s worst nightmare.”

It was decided Reagen would need three different corrective surgeries. She underwent the first one at just 11 days old. It took 16 hours.

“We weren’t prepared for what we saw when she come out of surgery,” recalls Natalie. “Her chest was bare — wide open. You could see her little heart beating for three weeks after her surgeries.”

Baby Reagen stayed in the hospital for three and a half months following her first surgery. The second surgery came when she was 5 months old, and a third when she was 18 months. Reagen did well over the next several years, but when an arrhythmia developed at age 7, doctors decided she needed a pacemaker.

When pressure on her heart resulted in fluid accumulating in Reagen’s legs and stomach in May 2012, she was put on the heart transplant list. On Jan. 17, 2013, Reagen received the gift of a donor heart.

“It’s really kind of mixed emotions because you know somebody else has to give their life in order for Reagan to get her heart,” says Dan.

Reagan suffered a stroke during her transplant, and the left side of her body had been affected. Her kidneys had also started to shut down, and she was placed on dialysis. A tube was placed into her windpipe through an incision in her neck, and she used a ventilator to help her breathe.

“The antibodies were attacking every organ in her body,” says Natalie. “She slowly learned to walk again, to talk again, and to be a normal teenager — something that she had never been able to do in the first place”

“They have given up so much of their family life and home life to help my child and help millions of other kids, day after day,” says Natalie. “I want to say thank you to their families for letting their family come in and help my family be a family.”