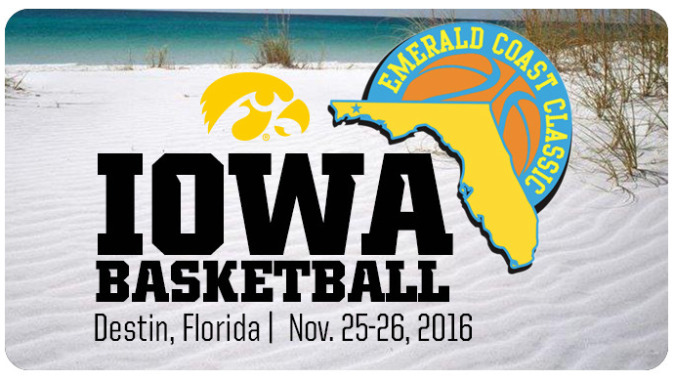 The University of Texas Rio Grande Valley, Savannah State and St. Francis College (Brooklyn) also are competing in the tournament with a fourth team to be announced within the next month.

Iowa, Providence and Virginia competed in the 2015 NCAA Men’s Basketball Tournament with Iowa and Virginia advancing to the third round.

First and second-round games will be played at on-campus sites Nov. 12 through Nov. 23, with the third round and championship round scheduled Thanksgiving weekend on Nov. 25-26 at The Arena on the campus of Northwest Florida State College in Niceville, Fla.

“We have assembled another great field in the third year of this event, reinforcing our goal of making this one of the top preseason college basketball events annually,” said tournament director Maury Hanks, who is also chief executive officer for Global Sports. “We have four great basketball programs with rich traditions from the top conferences in the country.”

Iowa received votes in both polls as well this week. Iowa is 4-2 this season, coming off an impressive 84-61 victory past No. 20 ranked Wichita State Sunday in Orlando. The Hawkeyes were 22-12 last year.

Virginia, the two-time defending Atlantic Coast Conference regular season champ, is ranked No. 10 in both the latest Associated Press and USA Today Sports Men’s Basketball Coaches polls. The Cavaliers are 5-1 this season, while capturing the Charleston Classic Nov. 22, in Charleston, South Carolina.

Virginia has enjoyed four straight 20-win campaigns, including consecutive 30-win seasons each of the last two years while playing in the NCAA Tournament.

Providence, which is 6-1, is ranked No. 23 in the latest Associated Press poll and No. 24 in the latest USA Today Sports Men’s Basketball Coaches Poll. The Friars knocked off then No. 11 ranked Arizona, 69-65 last Friday en route to finishing runner-up in the Wooden Legacy tournament Sunday in Anaheim, California. The Friars posted a 23-11 record last season.

Memphis is 3-2 following an 81-76 overtime victory past Ohio State last Friday. Under seventh-year head coach Josh Pastner, Memphis has posted five 24-plus win seasons, while advancing to four NCAA Tournaments. The Tigers posted an 18-14 record in 2014-15.

Global Sports has produced 29 multi team college basketball tournaments in the past six years including four during the 2014-15 season.