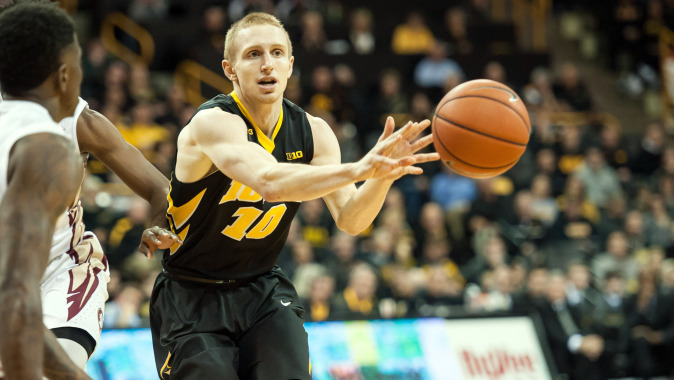 Q. From the moment it left his hands it looked like —
COACH McCAFFERY: Yeah, I’m really happy for him, because he had a very good game. You know, even when he kicked it off his foot, went back and got it. Made a big play there. But then he got really tired, and we took him out. I think that was critical to him being able to come back in and do what he did.

He’s that kind of person. He’s not afraid of the moment, and he made a big shot. Happy for him.

Q. Have you faced a more athletic team than this?
COACH McCAFFERY: The thing about them is obviously they are quick, but they are bouncy, they are long, and they have great size. So you know, their guards can gamble a little bit. They have the run protectors up in the passing lanes and they are constantly putting pressure on the ball on the next pass.

And then you think, I can get all the way to the rim, and sometimes you can, but a lot of times you can’t. It closes down on you. I thought our decision making for the most part was pretty good.

I thought Mike did a good job until the one play when he hit the back of the backboard. But I think he drew the defense, and he had people. Just took off on him.

Q. The last play —
COACH McCAFFERY: He had all kinds of options. We were hoping maybe for a foul. You know, kid did a great job. Got on the side of him. Didn’t foul him. In retrospect, there’s a million — could have called time-out, but I think he thought he could make a play. So you’ve got to give him credit for that.

Q. Talk about Clemmons coming out the second half, a lot of energy.
COACH McCAFFERY: You know, like I said before about him, everything just is better when he’s out there. If he’s playing the point, if he’s playing the two, things are just better when he’s out there. He defends. He made some really good plays in a stretch where we were struggling offensively I thought. And gives us the ability to rest Mike.

Q. How long is Dale going to be out?
COACH McCAFFERY: Could be serious. It’s still swollen. So we’ll wait and see. I know the doctor is talking to him and he’s talking to his mom right now. He’ll have some decisions to make.

Q. His ankle?
COACH McCAFFERY: No, this is the leg.

Q. How important for this team is a win like tonight where you maybe don’t play your best but still end up with a victory?
COACH McCAFFERY: You know, I think a win like this is going to benefit us in a lot of ways. Okay, we talked about the fact that we are playing an incredibly athletic team. When we are able to withstand — when they hit us first, jumped us 11-4, we didn’t panic. We hung in there. You kind of come in at halftime, I think we were down one, and kind of surprised that we’re only down one. But we made enough plays and we got enough quality minutes off the bench.

I thought our execution down the stretch was pretty good. We played the zone about as well as you could play it but we couldn’t get a rebound. They are so quick to the ball, and they were sending everybody obviously late. I thought we got the misses that we needed but they went back and got it. Some teams are really that good in that area. It’s going to really help us.

Q. Is it more in the lane, the points in the paint or something you’re doing team-wise?
COACH McCAFFERY: Obviously they are running stuff. But they are so quick off the dribble. Early on, they got some run-outs. They got behind us, which was obviously not in the game plan. But they are so fast. They just take off and they are gone, and the guards really have to get back.

But they have multiple guys that can score at the rim, bigs and medium-size guys. They can all drive it. You can play Smith at the center spot. You can play either of the two 7-3, 7-4 guys. And they went small, they start switching everything and really getting up in the passing lanes. That changes the look for the guy with the ball, guys that are normally open aren’t open, and it requires you to think and to make plays under those conditions. And that’s what we did.

So proud of our guys there. We had a few uncharacteristic turnovers, I thought in particular with Mike and Anthony. But in a situation like this, it might have appeared that they were over-dribbling, but part of the reason is, the X’s on the O. They are up all over the next logical receiver, and it’s sometimes hard, so you have got to take it one side to the other, and maybe bring it back again until you find somebody open.

Q. When he came here, he was not a good foul shooter and now he might be one of your best.
COACH McCAFFERY: He’s really worked at it. I’m really proud of him. He’s confident. He wants to get fouled and any time you see a guy accomplish something like that, it’s a great feeling, but I’m happy for him.

Q. Is that kind of the way you see this going?
COACH McCAFFERY: Well, we’re a little bit lighter without Dale. Obviously I have confidence in the four guys I played, obviously. I thought Dom Uhl was spectacular. I thought Ahmad was really good and Nicholas and Brady were solid.

I still can go to Christian and Andrew, comfortable with those two guys, so it still gives us 11 bodies, and I’m sure we’ll need all of them.

Q. How has the transition tonight?
COACH McCAFFERY: In particular, when they got behind us early and they got a couple easy ones, we really — it was a point of emphasis coming into the game anyway because they just — if you miss or if you get a shot blocked or if you take a bad shot, they are right on top of you. If you don’t get back and get faced up, they are just going to run right by you.

So I thought our guards in particular, if they got burned once or twice, they got back and at least were talking and communicating to our other guys, and we try to keep fresh guys in there, so we weren’t giving up those baskets at halftime, they had 32 points. They had 26 points in the paint. It’s hard to win. So did a better job I thought in the second half.