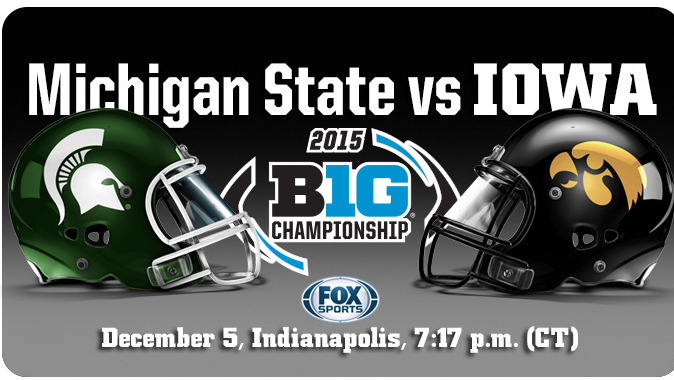 IOWA CITY, Iowa — If it was easy for college football teams to go through the regular season undefeated, more would do it.

That’s part of Joel Klatt’s take on the University of Iowa’s unprecedented 12-0 run (so far) in 2015. The FOX crew of Klatt, Gus Johnson, and Molly McGrath will call the Big Ten Championship Game on Saturday between No. 3 Iowa — champion of the West Division — and No. 5 Michigan State (11-1) — co-champion of the East Division.

“You see some of the losses people have, whether it’s Oklahoma against a pretty poor Texas team or Alabama losing at home,” Klatt said Tuesday after watching the Hawkeyes practice in the Stew and LeNore Hansen Football Performance Center. “These are good teams that end up losing; it’s not easy to go undefeated, and Iowa has been able to do that.”

Klatt was a three-year starter at quarterback for Colorado when Gary Barnett was head coach of the Buffalos. Barnett took over the program at Northwestern in 1992 after the Wildcats went 3-8 the year before under Francis Peay. In Barnett’s fourth season, Northwestern went 10-2 and played in the Rose Bowl; the following season the Wildcats were 9-3 and played in the Florida Citrus Bowl.

“Kirk Ferentz reminds me a lot of Gary Barnett, who I played for,” Klatt said. “A similar program and the practice was similar. One of the things I know about guys like that is they know how to not just motivate, but rally.”

As for Iowa’s season, Klatt said the 40-10 win at Northwestern sticks out.

“In hindsight, knowing how good Northwestern is and then to see that game play out how it did with such a lopsided victory for Iowa,” Klatt said. “I think it is less surprising and more so just impressive. They have also gone on the road everywhere and won. That is something that no one else has done.”

Klatt called the Hawkeyes “one of the more fundamentally sound teams out there,” especially in an age of multiple offensive sets and fast tempo. That attention to detail might have provided the margin needed to defeat Pittsburgh, 27-24, or Wisconsin, 10-6, or Minnesota, 40-35, or Nebraska, 28-20.

“I see lots of mistakes being made around the country and rarely do you see Iowa make any mistakes,” Klatt said. “They line up well and play fundamentally sound, don’t miss tackles on defense, take care of the ball, and win the turnover margin. They are not heavily penalized and those things pay off, in particular when you are going to play tight games. They also have kids that are tough and gritty and make plays when they need to. Those are the things that stand out to me.”

You can’t look at the final regular season Big Ten statistics without seeing Iowa and Michigan State side-by-side. Klatt said the teams will be looking in a mirror schematically and how they play: simple and structured.

A matchup that interests Klatt is Iowa’s defense versus Michigan State’s offensive line that averages 6-foot-4, 312 pounds at center, guard, and tackle. “While I don’t know if the defense for Iowa has any stars, it is so solid and has kept them in games when the offense hasn’t played well,” Klatt said. “Michigan State’s offensive line is just starting to get healthy and starting to peak, so I feel that is a strength against strength moment that I am excited to look for.”

Klatt would like to see more uniform conference scheduling across the Power 5 conferences, but it irks him from a player’s perspective when strength of schedule enters any conversation.

“The player had no hand in making the schedule, all he does is prepare,” Klatt said. “He gets himself ready physically during the offseason, mentally ready during fall camp, and every week he goes out there to prepare to win a football game. He doesn’t have any say of where that football game is going to be played or who the opponent is. I can’t stand it if you try to discount kids who are 18-22 years old for their accomplishments on a field.”

Besides, if it was easy for college football teams to go through the regular season undefeated, more would do it.