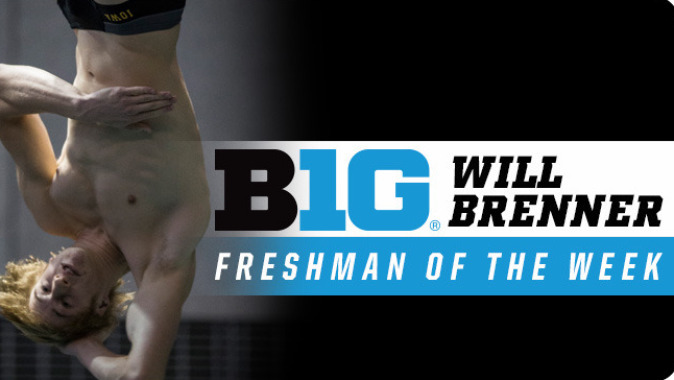 IOWA CITY, Iowa — University of Iowa diver Will Brenner has been named the Big Ten Freshman of the Week, it was announced Wednesday by the league office.

Brenner earned the distinction after breaking the school record en route to the individual title on the 1-meter springboard, helping Iowa to a team title at the Hawkeye Invitational. The Ypsilanti, Michigan, native posted an NCAA Zone Diving qualifying score of 365.00 to break the school record by nearly seven points.

“I’m proud of Will, it is fantastic for him to be recognized with this honor,” said UI diving coach Todd Waikel. “His performance was a surprise this early in the season, but it shows how talented he is. This is the tip of the iceberg for Will, and I think you’re going to see a lot greater diving to come.”

Brenner also tallied a pair of fourth place finishes, diving to a career-best score of 309.25 off the 3-meter and 267.55 off the platform. It was his first collegiate meet off the tower.

The Hawkeyes return to action Jan. 23 in a road dual at Northwestern.