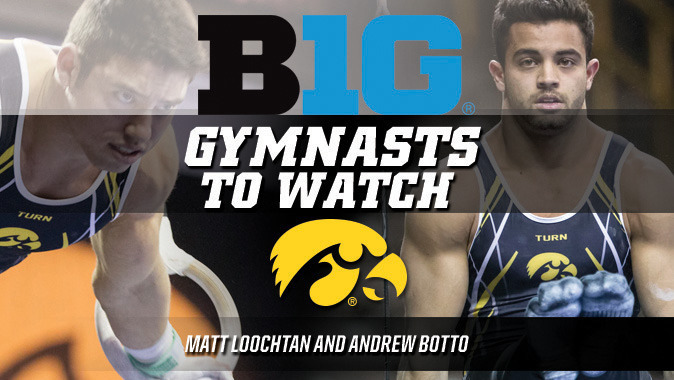 IOWA CITY, Iowa — A pair of University of Iowa gymnasts were included on the Big Ten Men’s Gymnasts to Watch List, as announced by the conference office Thursday afternoon. Senior Matt Loochtan and junior Andrew Botto were two of 14 athletes recognized.

It is Loochtan’s second time earning the honor, as he was included on the list as a junior. The Hawthorn Woods, Illinois, native capped that season with a 10th place result on floor and seventh place finish on rings at the NCAA Qualifier. At the Big Ten Championships, Loochtan cracked the top five with a fourth place finish on rings, finished 10th on parallel bars, and placed 24th on floor exercise. He holds the Iowa school record on floor exercise with a 15.650 effort, and set a new career best score on vault (15.150).

Iowa, a team that earned a sixth place finish at the 2015 NCAA Championship, was picked to finish sixth in the Big Ten preseason poll.

The Hawkeyes open their regular season on Jan. 17 at the Windy City Invitational in Chicago, Illinois, and are in action at home for the first time in 2016 against Big Ten foe Illinois on Jan. 23.