Career-High 26 By Disterhoft Not Enough in Ames 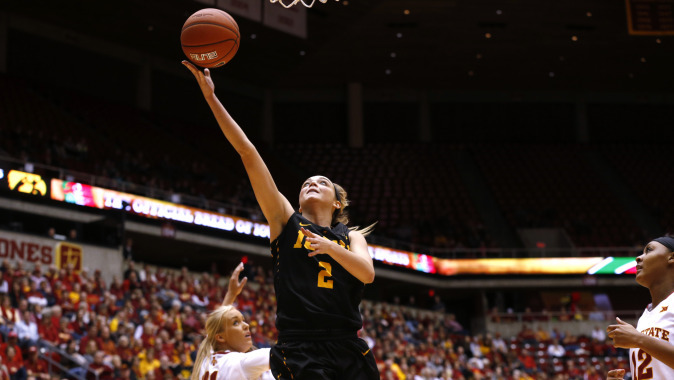 UI junior Ally Disterhoft scored a career-high 26 points with eight rebounds and three assists. Junior Alexa Kastanek (14 points) and Chase Coley (12) were also in double figures for the Hawkeyes, who saw their three-game winning streak come to an end.

Coley scored Iowa’s first seven points of the second half (after scoring the first four in the game) and when Disterhoft nailed a jumper with 6:58 left in the third quarter, the Hawkeyes owned their biggest lead at 44-33 (they matched it two other times in the third quarter). But the Cyclones countered with an 11-point scoring edge over the final 10 minutes to emerge with the win.

Bluder pointed to a lack of rebounding over the final 10 minutes (15-7) as a factor that favored Iowa State.

“They out-rebounded us by seven (41-34) and had 13 offensive rebounds, “Bluder said. “We didn’t have an answer for stopping Seanna Johnson from attacking the rim. Every time she attacked she got a three-point play the old fashioned way. We couldn’t keep her off the boards, either. Our defense wasn’t very good in that fourth quarter.”

Johnson led Iowa State with 22 points, 10 rebounds, and five assists. She scored 11 points and was 5-of-5 from the line in the fourth quarter. Disterhoft led Iowa over the final 10 minutes with nine points, three rebounds, and a blocked shot. It was Disterhoft who attempted the final 3-point field goal that misfired.

“That was a pretty desperation 3 that Ally had to put up for us,” Bluder said. “It shouldn’t have come down to us getting a 3-point play. We have a lead going into the fourth quarter (54-46) and unfortunately, just didn’t play a fourth quarter.”

Iowa led 33-28 at halftime and made all nine free throw attempts. Kastanek scored 11 points at the break, Disterhoft had eight points and two assists, and Carly Mohns pulled down four rebounds. The Cyclones owned the final quarter, making 8-of-15 field goals with two 3-pointers; Iowa was 4-of-15 with one basket from long range.

The Hawkeyes conclude the nonconference slate with home games against Bradley on Dec. 19 and Drake ono Dec. 22.

“It’s tough because we have to sit on a loss for an awful long time and that’s hard to do,” Bluder said. “It is harder to go into Finals with a loss, especially one like this that hurts a little bit. We’ll rest over the weekend and get back after it and get ready to play Bradley.”