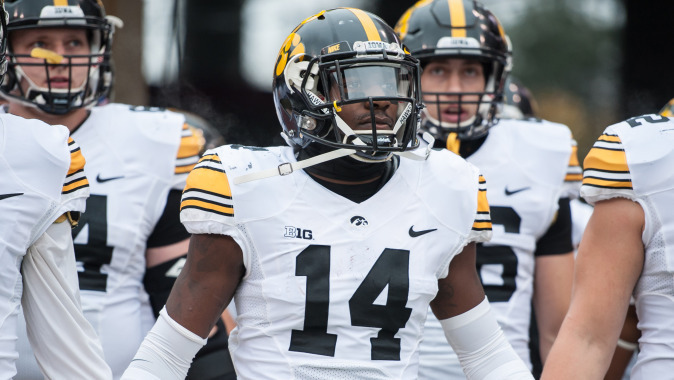 The Associated Press honor marks at least the third outlet that has named King as a first team All-American, as he was recently named to teams selected by USA Today and SI.com. King was honored Thursday as the receipient of the Jim Thorpe Award, which goes to the top defensive back in the nation.

King was earlier named the Tatum-Woodson Big Ten Conference Defensive Back of the Year and was a first team All-Big Ten selection. King was also one of five Players to Watch for the Walter Camp Player of the Year Award.

Blythe was one of three finalists for the 2015 Rimington Trophy, which is presented annually to the Most Outstanding Center in NCAA Division I college football. He was also named honorable mention All-America by SI.com.

Blythe (6-foot-3, 290-pounds) has started all 13 games in 2015. He is a native of Williamsburg, Iowa. Blythe has started 44 straight games over the past three years and has 48 career starts. He earned second team All-Big Ten honors this season and has been a game captain for all 13 games.

Blythe has played a key role for the Hawkeye offense in 2015. The Hawkeye offense is averaging 32.1 points per game, 192 rushing yards and 201.8 passing yards per game. Iowa scored over 30 points in five straight Big Ten games for the first time ever, and the Hawkeyes rank among the national leaders in time of possession.

Blythe was also named second team All-Big Ten by league coaches in 2014, and earned honorable mention recognition in 2013. He started nine games at right guard as a redshirt freshman in 2012. Blythe earned first team Freshman All-America honors from Scout.com in 2012 after starting nine games at right guard. He started all 13 games at center in 2013. He has been named to Iowa’s Leadership Group for four straight years.