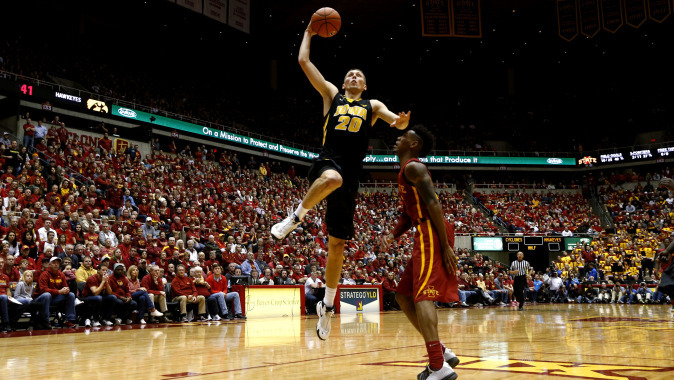 ROSEMONT, Illinois — University of Iowa senior Jarrod Uthoff was named Big Ten Co-Player of the Week along with Maryland’s Melo Trimble. The announcement was made Monday by the Big Ten Conference office.

The honor is the second of Uthoff’s career, having first earned the recognition on Jan. 6, 2015, following his performances in victories at Ohio State and against Nebraska.

The native of Cedar Rapids, Iowa, scored a career-high 27 points in a 90-56 win over Western Illinois, and then bested that performance with a personal-best 32 points in a one-point loss at No. 2 Iowa State.

The Hawkeye senior scored 24 of his 27 points in the first half against the Leathernecks and 30 of his 32 in the first 20 minutes against the Cyclones. Uthoff’s 32 points are the most by a Hawkeye since Matt Gatens had 33 against Wisconsin on Feb. 23, 2012, and the most by a Big Ten player this season against a ranked opponent.

In the first half against Iowa State, Uthoff was 11-of-13 from the field, including 5-of-6 from 3-point territory, and 3-of-4 from the free throw line.

Uthoff and the Hawkeyes (7-3) return to action Saturday when they travel to Des Moines, Iowa, to face Drake University (4-6) in the Hy-Vee Big Four Classic. Tipoff from Wells Fargo Arena is scheduled for 3:30 p.m. (CT). The game will be streamed on computers and mobile devices via ESPN3 (WATCHESPN).