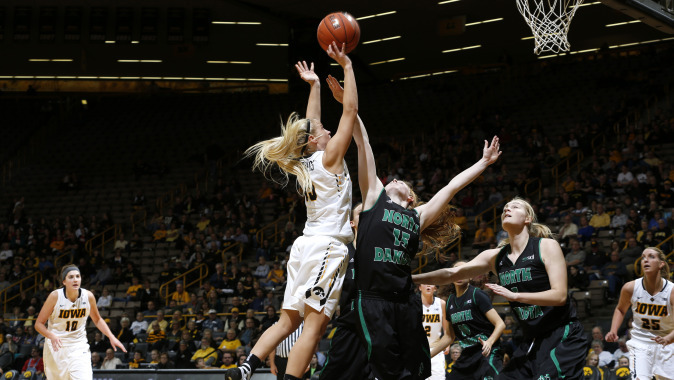 PROMOTIONS
? The Hawkeyes will sign autographs following Saturday’s game. It is the only autograph opportunity this season.
? Saturday is also Four Pack Night. Fans who order the deal ahead can get four tickets, four hot dogs, and four drinks for just $35.
? Elite Chevy Kids Zone is available pregame.

GAME COVERAGE
? Saturday’s contest will be shown live online through BTN Plus available at btn2go.com.
? Audio of the game is also available on select Hawkeye Radio Network stations and online through Hawkeye All-Access. Brent Balbinot and Stacy Schlapkohl will call the action.
? Balbinot is in his 12th year as Iowa’s play-by-play voice.
? Schlapkohl, who played in 104 games with 49 starts, helped Iowa to three NCAA Tournaments. She scored in double figures in 22 games.
? Links to video, audio, and Gametracker (live stats) are available on the women’s basketball schedule page at hawkeyesports.com.

SERIES RUNDOWN
? Iowa leads Bradley, 5-1, in the all-time series.
? The Hawkeyes won five games in a row, before the Braves won the most recent meeting on their home court, 96-88, in the 2011-12 season.
? Iowa is 4-0 against Bradley on its home court in Carver-Hawkeye Arena.

SCOUTING THE BRAVES
? Bradley, a team that returned four starters from last season, was picked to finish ninth in The Valley.
? The Braves own a 4-4 record, most recently defeating Kent State, 68-60. The team’s other three wins came at Detroit, 75-67, against Eureka, 87-47, and at Chicago State, 66-60.
? Iowa is the second ranked opponent Bradley has faced this season. They fell to 17th-ranked Oklahoma, 79-46, on Nov. 22.
? As a team, Bradley averages 63.8 points per game. Anneke Schlueter (13.1) and Leti Lerma (10.1) average in double figures through eight games. Lerma is also the leading rebounder, averaging 7.3 per game.
? The Braves are led by fourth-year head coach Michael Brooks. The roster is comprised of four freshmen, six sophomores, three juniors, and two seniors.

HOME SWEET HOME
? Iowa women’s basketball has won 22 consecutive games on Mediacom Court in Carver-Hawkeye Arena.
? The streak began when the Hawkeyes posted a perfect 18-0 mark at home in 2014-15 and has continued into the 2015-16 season.
? The 22-game win streak is the third-longest home win streak in program history.
? Iowa’s longest home win streak lasted 46 games, including the final 13 home games of the 1986-87 season, all 14 home games in the 1987-88 season, all 14 home games in the 1988-89 season, and the first five home games of the 1989-90 season.
? The second longest home win streak lasted 25 games. It began when the Hawkeyes went 17-0 at home in 1992-93 and stretched eight home games into the 1993-94 season.
? Eleven home contests remain on the 2015-16 schedule, including nine against Big Ten opponents.
? Iowa was one of 13 teams nationally to finish undefeated on its home court with an 18-0 mark last season, a program record for wins at home in a single season.

MOVING UP THE CHARTS
? Junior Ally Disterhoft is 26th on Iowa’s all-time scoring list with 1,148 career points and 29th all-time with 480 career rebounds.
? She has played in every game of her Hawkeye career with 61 consecutive starts.
? Disterhoft has scored in double figures in every game this season, and in 55 of her 61 career starts.
? The co-captain leads Iowa in points per game (17.1) and assists per game (3.5).

UP NEXT
Iowa hosts its third and final in-state opponent Drake on Tuesday, Dec. 22 at 5 p.m. The game will be played in Carver-Hawkeye Arena. The Hawkeyes have nine days after that to prepare for their Big Ten Conference opener at Nebraska on Thursday, Dec. 31. Tipoff is set for 1 p.m. in Lincoln, Nebraska.