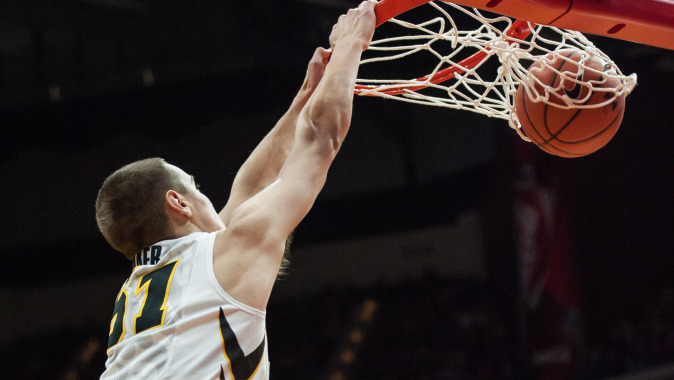 The honor is the first of Baer’s career and the second time in as many weeks that a Hawkeye earned weekly recognition from the conference office; Jarrod Uthoff was named Big Ten Co-Player of the Week on Dec. 14. Baer becomes the first Hawkeye to earn Big Ten Freshman of the Week honors since Mike Gesell on Dec. 17, 2012.

Baer scored 13 points making five of his 10 field goal attempts, including going 3-of-5 from 3-point range. The native of Bettendorf, Iowa, also grabbed seven rebounds and blocked a personal-best six shots while playing a career-high 30 minutes in Iowa’s 70-64 victory over Drake at the Hy-Vee Big Four Classic in Des Moines.

Baer’s six blocks, four of which came in the first half against the Bulldogs, broke the Wells Fargo Arena record in a college basketball game. The six rejections in a game were also the most by an Iowa freshman since Melsahn Basabe denied six shots against Ohio State in 2011. Baer’s six blocks helped Iowa establish a school record for total blocks in a game with 14, besting the previous mark of 13 set against Illinois on March 5, 2013.

Baer and the Hawkeyes (8-3) return to action Tuesday when they entertain Tennessee Tech (8-4) in Iowa’s nonconference finale. Tipoff is scheduled for 7:31 p.m. (CT) on Mediacom Court at Carver-Hawkeye Arena. The game will be streamed on computers and mobile devices via ESPN3 (WATCHESPN).