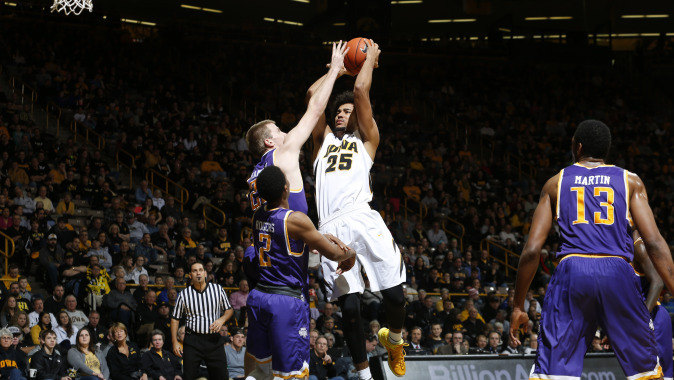 Little bit of a slow start. What do you think kick started you guys?
COACH MCCAFFERY: I thought we really, we missed our first nine threes, but I thought we had really good shots. We moved the ball, we were open, we had good shooters shooting good shots. The key in that situation is you got to keep defending. Sometimes you miss all those the shots that normally go in and next thing you know you’re down 15-5. And it’s a different kind of game. I thought our defense was spectacular in the first half.

Q. Nicholas scored 19 tonight. He started making them look easy.
COACH MCCAFFERY: He does what he does. He scores inside, he can hit threes, he moves the ball, he understands how to play. He’s a terrific player. There’s no other way I can say it, he has a complete game. He’s going to impact the game when he’s on the floor.

Q. As a coach, what’s it like when you can find a diamond in the rough like Nicholas?
COACH MCCAFFERY: Well I’m happy for him, because all he wanted was an opportunity. And ultimately he believed in himself. We can believe in him, we can give him a chance, but he had to make it happen. And he’s really worked from the minute he said he was coming here, he’s really worked. And I just couldn’t be prouder of him. Everybody on the team loves him. He’s just one of those guys.

Q. That stretch at the end of the first half, Peter drained three threes, started the second half two more threes. Is that about as good as you’ve seen him play.
COACH MCCAFFERY: It’s funny because in the first half I thought he was a little sloppy early. And I jumped him. I yanked him. I put him right back in and he just took the game over.

And that’s the Peter Jok we need to see. When his game is tight like that, he affects the game at both ends. He’s on the glass, he’s up in the passing lanes, and I thought he was terrific.

Q. Mike Gesell scores two points but seems to be in control of the game all day?
COACH MCCAFFERY: He was. Because in the beginning, if you remember, they were disguising defenses. They would show 1-3-1 and play man, they would come and get us full court man, they would play 2-2-1, back, man, back to a zone. They were changing defensive teams.

So you need a point guard that’s just constantly on the attack. I thought his head was up, he was throwing it. He had 10 assists, he could have had more because he was loading people up. We had really good shots. I thought that a lot of them we quick shot it a little bit late, but other than that I thought our shot selection was really good.

Q. Do you like the way you moved the ball tonight?
COACH MCCAFFERY: I did. I thought — we have really been working on that. Because sometimes you play a team that plays straight man. They played straight man and they played some switching man. So that changes how you move, how you screen, where you go.

I remember the play in the first half, Uthoff set a great back pick, Clemmons gets a wide open layup. Those are the kinds of things that you want to be able to take advantage of and we did.

Q. Not sure how much stock you put into this stat, but Jarrod Uthoff was plus 31 in 22 minutes. That’s almost incredible to have a point and a half impact per minute.
COACH MCCAFFERY: The thing about him, he’s not a mistake maker. Okay. And he rebounds and he defends and he scores. So, you’re right, that’s a high number, but it’s typically going to be on the positive side with him.

Q. Fleming went down.
COACH MCCAFFERY: He’s got a bruise in the back, he’ll be all right.

Q. Think you’re ready for Big Ten play? Is this a good final test for you?
COACH MCCAFFERY: I thought so. I think this is a pretty good team here. They have eight wins, four double digit comeback victories in the second half, they have scored — they put 42-up in the second half, they put over 50 up a bunch of times, they got a terrific point guard, they got two bigs that are workers, they have got talent and they work. Rogers comes off the bench, he can play. He’s goes off the dribble he can play to the point. They can move Rowe to the off guard position. Jugovic is a really good shooter, so they challenge your defense in a lot of ways. And they got a couple other guys that drive the ball, like Thomas. So athletic team that is used to winning, and we did what we had to do, so that’s good.

Q. Do you have a biggest concern going into Big Ten play? Is there any one thing that you’re concerned about or how do you think the team is ready right now?
COACH MCCAFFERY: I think we’re in a pretty good place. You always look at, could we run our offense a little more efficiently, could our defense get more consecutive stops? Like, for example, Saturday’s game against Drake, we get out rebounded. That’s never a good thing. I don’t care who you’re playing. So tonight we wanted to out rebound them. We did. We did get to the offensive boards, we got 12. We’re taking care of the ball, I think our shot selection’s good, our ball movement is good. We got a lot of different guys producing. I think that, ultimately, I feel pretty good.

Q. What can you say about — I know we don’t want to look too far ahead, but starting off the Big Ten with not just Michigan State, but Purdue and you got to face those guys twice. Are you guys looking forward to a challenge like that to start Big Ten play?
COACH MCCAFFERY: We always look at it like this: You got to play those people at some point. You play them early, you play them late, you play them in the middle, you space it out better. Does it really matter? You’re still playing 18 really tough games against really good teams. Those two are particularly talented. If you look at where they’re ranked and so forth. But I think any time you enter into conference play, you recognize a challenge and we’ll do everything we can to get everybody ready.