From the Lineage of Roses 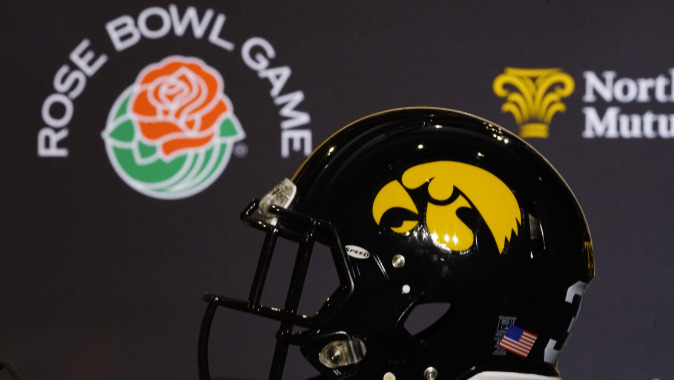 LOS ANGELES — At 24 years, senior wide receiver Jacob Hillyer and senior punter Dillon Kidd are the oldest members of the University of Iowa football team. Neither was born the last time the Hawkeyes played in the Rose Bowl Game on Jan. 1, 1991.

Still, there are eight members of the current UI team that have received an up-close and personal Hawkeye narrative of what it’s like to play in the Granddaddy of Them All…from their fathers.

“It’s awesome, the fact all the guys on the team had dads on a team back then,” George said. “I always thought that was a cool thing to follow in your father’s footsteps. That has meant a lot to me and I’m sure it means a lot to the other guys on the team as well.”

Bruce tore an ACL in the sixth game of the 1981 season when Iowa defeated Michigan, 9-7. Less than three months later he played in the Rose Bowl.

“Winning the Big Ten championship would have been nice like they did in 1981, but the fact we get a shot in the Rose Bowl like our fathers did is a great thing,” George said.

A defensive star for the Hawkeyes in the 1982 Rose Bowl was Jim Pekar, Peter’s father. Pekar made 11 tackles (eight solo) with a tackle for loss and a pass breakup.

“It is the game he talks about most in his career because it is the Rose Bowl. It still is the greatest bowl,” Peter said.

But Jim never mentioned his performance to his son.

“I didn’t know all of his statistics,” Peter said. “He doesn’t talk about himself. Now I have to text him and tell him he had a good game. But he didn’t say much because they lost.”

“All I really know about it is they came down and played UCLA and couldn’t get it done,” Cole said. “Hopefully we can get it done this year.”

Rick Schmidt made one tackle.

“He said to enjoy it because it is an experience he has never forgotten,” Ryan said. “He talks about it and still talks to guys on his team from back then. He said it is a great experience.”

Cook and his father grew up watching the Rose Bowl Game every year on television. Now they share the experience of both being on the sidelines in Rose Bowl Stadium.

Keppy also hears Rose Bowl stories from his grandparents, who flew to California to watch the 1986 Rose Bowl. His father, Myron, lettered for the Hawkeyes in 1986 and 1987.

“He said it was cool and one of the best games you could ever play in in college,” Mitch said. “(My dad) had a great experience and he told me to enjoy everything out here because it is awesome.”

All of Willie Bishop’s bowl jerseys hung in Brandon’s grandmother’s house. One year she presented Brandon with his father’s Freedom Bowl jersey worn during a 55-17 Iowa win over Texas in 1984.

“I grew up looking at his Big Ten championship ring and Rose Bowl watch,” Brandon said. “He talks about how it was the time of his life and how much fun he had. He said just like I tell you about it all the time, you are going to be able to tell your kids some day.”

Jeff Nelson started at defensive tackle for the Hawkeyes in the 1991 Rose Bowl Game, a 46-34 loss to Washington. Nelson compiled four tackles and one tackle for loss. Anthony Nelson, like Drew Cook, is redshirting this season and will not play in Friday’s game against No. 6 Stanford.

“He told me to take it all in, have fun, enjoy it, make sure you do your best to prepare and do my job to prepare the other players,” Anthony said.

Two sets of brothers have had “non-Hawkeye” fathers participate in a Rose Bowl Game. Brian Ward, father of junior offensive lineman Ryan and sophomore defensive back Kevin, was an offensive tackle for Illinois in the 1984 Rose Bowl. The Illini lost to UCLA, 45-9.

While none of the seven Hawkeye alumni/fathers were able to hoist a Rose Bowl Trophy, LeShun Daniels, father of Hawkeyes LeShun, Jr., and James, did. Daniels started on the offensive line for Ohio State in the 1997 Rose Bowl, won by the Buckeyes, 20-17, over Arizona State.