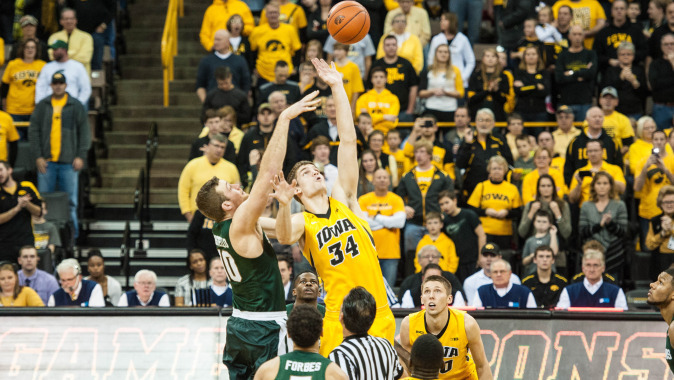 Q. Tom gave a lot of credit to Clemmons for his defense on Forbes. Would you speak to that a little bit?
COACH MCCAFFERY: He’s absolutely right. You look at this team, and they have a lot of weapons. Valentine is a big part of what they do. So he’s out, you look at Harris, Forbes, Costello stepping up.

You look at the last game, 32, 27, that’s what they had. Forbes’s numbers this year are way better than they have ever been. He’s been more aggressive off the dribble, he’s doing a lot of stuff. We didn’t give him any clean looks, we didn’t give them anything in transition, we didn’t give them anything easy off down screens because they run a lot of stuff for him. That’s why they started going inside a bit more, Costello got a little bit more involved in the second half. Harris is going off the dribble. We got to do a little better job on him.

Q. We saw this before, what does a win like this do for this group?
COACH MCCAFFERY: We had a great, close win against Florida State, too. And Drake. So you want to win them all. Certainly want to win more than you lose in those situations, but I’m proud of my guys.

Q. What did you see different in the team this time that maybe may not have been there in those other games?
COACH MCCAFFERY: We really sustained effort and paid attention to detail with regard to the game plan. We didn’t give them transition buckets. Jarrod had a few uncharacteristic turnovers, but for the most part we didn’t turn it over. They did. Eleven in the first half, they only had five in the second half. We put pressure on the ball, we put pressure on the next pass.

They are typically a team that doesn’t have 11 assists on 27 baskets. It’s usually a lot higher percentage. So I think we disrupted their offense quite a bit. We mixed the man and the zone, a little bit of pressure, and then when we had foul trouble, I thought the guys that came in really picked us up.

Q. What’s a win like this mean for you and your guys overall?
COACH MCCAFFERY: It’s the first game in the Big Ten season. Celebrate tonight and go back to work tomorrow. It’s one win.

Q. You had to sit down Jarrod with foul trouble in the first half. How important was it to have Nick come in and play as well as he did?
COACH MCCAFFERY: I thought Nick, Dom and Ahmad all were very good. Nicholas, in particular, hits the three, gets the steal, and gets the dunk. He was spectacular. But that’s what he does. He’s just a really good player. And he affects the game in a lot of different ways. He’s different kind of player than Jarrod. So, we still got some offense, but we got some other things, too.

Q. They were making a run at you within, I think, with like under five minutes left, Mike takes the charge, hits a big bucket, feeds Woody?
COACH MCCAFFERY: It never got under 10. I think that was critical. All of a sudden it gets under 10 and then pretty much a three-possession game. We kept it at 10 and then we got the ball back like you said, went to 12, went to 14, I think, at that point. We’re in the double bonus.

Q. Mike just seems to be, as a senior point guard, just seems to be taking it to the next level here.
COACH MCCAFFERY: His decision making was really incredible, because you don’t have a lot of opportunities to drive against that defense. You have to pick your shots when you go and when you don’t go. Sometimes you start to go and it closes on you quick and you got to move it on.

But he was getting it to the rim and he was getting them in foul trouble. When he’s breaking the defense down like that, then it opens things up for Pete, then you get your slips with Woody and he finishes. Get Jarrod going like he was a little bit early, now we’re tough to guard.

Q. How important is this for confidence in this team to know that they can work over a team that good for a consistent 40 minutes?
COACH MCCAFFERY: I would like to think it’s a great confidence builder in that sense, but we got another Top-10 team going Saturday. So, hopefully, we learned lessons of how to compete, how to execute, and how to not take a possession off, and we carry that over for Purdue.

Q. You started the Big Ten season with a win each of the last three years. How big is that, getting that confidence right into conference season?
COACH MCCAFFERY: I think it’s big, but the other thing we have always seen in this league, is that you want to win your home games if you can. It’s not always easy, depending upon who you’re playing. It’s hard to win on the road in this league. So you want to play well at home, the crowd was absolutely spectacular tonight. I mean couldn’t ask for more from them. It’s great to see them be able to run on the floor and enjoy it.

Q. Anything you saw tonight that needs to be fixed moving forward?
COACH MCCAFFERY: Oh, there’s plenty. We’ll deal with that later on in the week.