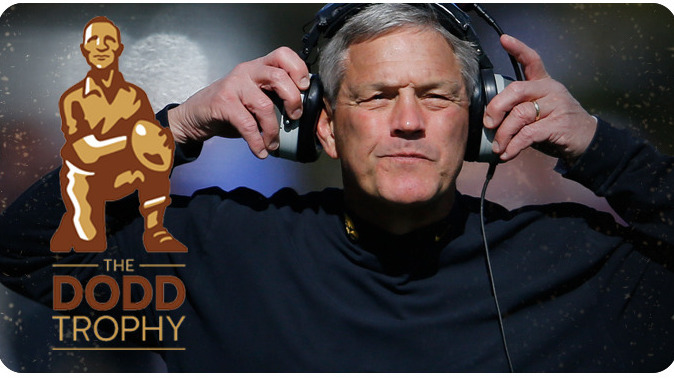 IOWA CITY, Iowa — University of Iowa head football coach Kirk Ferentz has been named the recipient of the 2015 Dodd Trophy. The announcement was made Wednesday by the Bobby Dodd Coach of the Year Foundation and the Chick-fil-A Peach Bowl.

Presented annually by the Chick-fil-A Peach Bowl, The Dodd Trophy, college football’s most coveted coaching award, honors the head football coach whose program embodies the award’s three pillars of scholarship, leadership and integrity, while also having success on the playing field throughout the season.

“It is an honor to be recognized with the Dodd Trophy, knowing what this award represents in college football on a national level,” said Ferentz. “I appreciate the recognition for the hard work of our entire coaching staff and every member of our football program and appreciate the acknowledgment of our accomplishments. I am honored to share this recognition with our staff, our players and our great fans and I am grateful to the University of Iowa for providing the necessary support for our success.”

“On behalf of the Bobby Dodd Coach of the Year Foundation, we congratulate Coach Kirk Ferentz,” said Jim Terry, chairman of the Dodd Foundation. “His success on and off the field this season made our decision an easy one. He represents the pinnacle of coaching achievement and loyalty and has built a program that is admired by many throughout the country. His leadership has prepared a community of young men to be leaders in the world, ensuring that Coach Dodd’s legacy will continue for generations to come.”

Ferentz was named both the Dave McClain and Hayes-Schembechler Big Ten Conference Coach of the Year on Dec. 1, marking the fourth season he has earned the league honor.

Ferentz is in his 17th season as Iowa’s head coach. He guided the Hawkeyes to a perfect 12-0 regular season mark, the most wins ever for a Hawkeye football team. Iowa, ranked fifth in the College Football Playoff (CFP) rankings, has earned a spot in the 2016 Rose Bowl against Stanford (Jan. 1, 4:10 p.m. CT, ESPN). The Hawkeyes lost to Michigan State in the Big Ten championship game, 16-13 after winning the West Division.

Ferentz ranks seventh in Big Ten conference wins (76) and eighth in total victories (127). He has led Iowa to 13 bowl games in the last 15 seasons, including eight January bowl events. Ferentz has led Iowa to nine first-division finishes in the Big Ten, including winning the conference in both 2002 and 2004.

With a head coach leading by example, members of the Hawkeye squad have also thrived in the community. A crucial component of character building for the Hawkeyes is community service. From 2013 to 2015, the Iowa football team combined for more than 1,500 community service hours.

While Ferentz has guided the Iowa program to great success on the field, the Hawkeyes have also made their mark in the classroom. In the most recent release on academic standings, Iowa’s football team compiled a Graduation Success Rate (GSR) that ranked above the national average. The 2014-15 Academic Progress Report (APR) showed a score of 966 for Iowa football, a score that ranked 10 points above the national average for football programs.

In addition, defensive back Jordan Lomax was named to the CoSIDA Academic All-America second team. The senior who finished third on the team in tackles earned academic All-Big Ten honors each of the past two seasons. Lomax carries a 3.49 GPA, has been a member of Iowa’s Leadership Group the past three seasons and was named the Lott IMPACT Player of the Week in November.

“We’re proud to present college football’s most prestigious coaching award, and strongly believe in the tenets it represents,” added Gary Stokan, president and CEO of the Chick-fil-A Peach Bowl. “Coach Ferentz has long exhibited the ideals that are emblematic of Coach Dodd – scholarship, leadership and integrity – so we are honored to recognize him and the impact he has had on his student-athletes and in the Iowa City community.”

Six of the nation’s top head coaches (Mark Dantonio, Kirk Ferentz, Jim McElwain, Ken Niumatalolo, David Shaw and Dabo Swinney) were named finalists for this year’s award by a panel consisting of all previous winners, national media, a member of the Dodd family and a College Football Hall of Fame member.

About The Dodd Trophy
The Dodd Trophy was established in 1976 to honor the NCAA Football Bowl Subdivision (formerly Division 1A) head football coach whose program represents the highest ideals on and off the field. The award honors the coach of a team which enjoys a successful football season, while also stressing the importance of academic excellence and character, as did Coach Dodd’s teams during his 22 years as head football coach of the Georgia Tech Yellow Jackets. Coach Dodd remains one of college football’s legendary figures, both as a coach and a player. Coach Dodd was a native of Galax, Virginia, and played his college ball at the University of Tennessee where his team had 27 wins, one loss and two ties during the three years he played. Coach Dodd was selected to the National College Football Hall of Fame both as a coach and as a player. Additional information about the Bobby Dodd Coach of the Year Foundation can be found at www.bobbydoddfoundation.com.