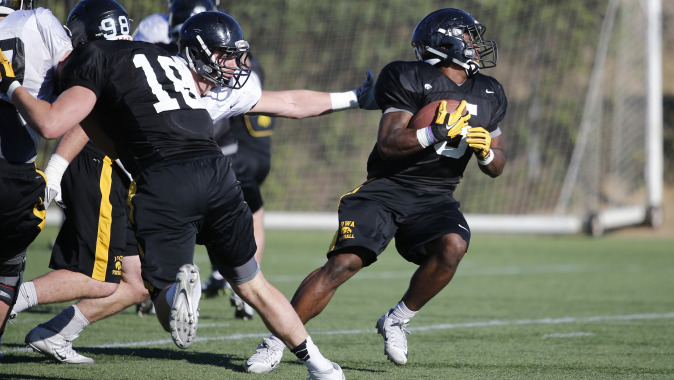 LOS ANGELES — How does the University of Iowa prepare to contain a running back that set a Football Bowl Subdivision record with 3,496 all-purpose yards in a season and finished runner-up in the Heisman Trophy race?

By imitating him in practice with a true freshman with collegiate totals of zero carries, zero receptions, and zero returns.

Stanford sophomore Christian McCaffrey’s No. 5 jersey was worn throughout Rose Bowl Game week at Hawkeye practices by first-year running back Eric Graham. It is not an unusual role for Graham, who throughout the season impersonated running backs like Marshaun Coprich of Illinois State, Ke’Shawn Vaughn of Illinois, Justin Jackson of Northwestern, and Jordan Howard of Indiana.

“Eric does a good job every week,” said freshman Drew Cook, who spent his time in California as scout team quarterback. “He uses his talents, speed, and strength to give a good look to the defense every week. This week hasn’t been any different. He is doing a great job being (Stanford’s Christian) McCaffrey, a great running back.”

McCaffrey finished second to Alabama’s Derrick Henry in the 2015 Heisman Trophy voting. The 6-foot, 200-pound sophomore from Castle Rock, Colorado, has rushed for 1,847 yards, caught 41 passes for 540 yards, and returned 36 kicks for an average of 28.9 yards per return.

“We watched a lot of film on (McCaffrey) and I mimic him the best I can,” Graham said Tuesday at a news conference at The LA Hotel Downtown. “I have been all the running backs the past 13 games. I try to do my best to give the defense a good look; when I’m on the scout team I do what they need so they can look good on Fridays and Saturdays.”

Graham is a 5-9, 195 pound running back from Prattville, Alabama. He was a three-time all-state selection in high school and as a senior he rushed for more than 2,400 yards and 33 touchdowns.

“Eric does a great job back there, he has done it all year,” said UI defensive coordinator Phil Parker. “We give him a lot of different options — he is the Wildcat guy, he is the running back, we move him to receiver. He has done a great job.”

For Graham, there have been a few “victories” in the form of long runs once the Hawkeyes started to drill at the StubHub Center in Carson, California.

“We had some pretty big plays that would hurt us in the game Friday,” Graham said. “But (the defense) got back to it and kept going until they got it right.”

That’s not to say the Hawkeye defense didn’t contribute its share of hard hits on No. 5 during the week.

“We had (Eric) fired up. He was Heisman runner-up and (Monday) he had a heck of a day running the ball,” Parker said. “That might have been the most physical practice in 9-on-7 that we have had so far. We enjoyed it, our kids got into it, and Eric enjoyed doing that for us.”

“I took some good shots from Miles Taylor and the rest of them,” Graham said with a grin.