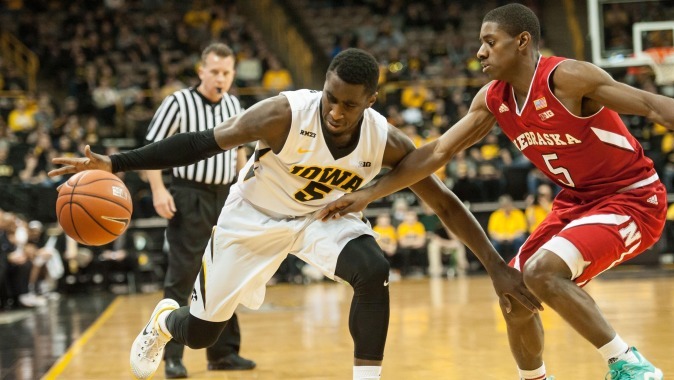 Q. Mike Gesell, kind of a vintage performance from him?
COACH MCCAFFERY: He was great. He needed to be great tonight because clearly Clemmons was not himself. He gave us a gutty 17 minutes, Anthony did. But he was not as explosive as he normally is. Put a lot of pressure on Mike, especially when they started pressing late. But I thought in that one stretch in the second half, he and Jarrod kind of took the game over and made sure we won.

Q. You were down 10-0 and then you switched to the zone press and shook some things up. Was that a way to generate some offense?
COACH MCCAFFERY: It did two things. It did that, but it also generated some energy. We played with more energy. We started running more, the crowd got involved, the crowd got energized. Then our break was better, our ball movement was better, so. We only created nine turnovers, but a couple of them were right there and we were close to couple more and got their offense a little bit sideways, I thought.

Q. Mike’s having a career year for you guys. Is there something you can point to as to why he’s been so good this season?
COACH MCCAFFERY: No, he’s just a terrific player, he’s an incredibly hard worker, he’s smart, he’s got experience, he wants it badly. He’s doing exactly what I thought he would do.

Q. How would you summarize Uthoff’s skill set and there anybody in basketball you’ve seen that you might compare it to?
COACH MCCAFFERY: I would have to think. But it’s rarely — it’s rare that you see kind of a small forward with that kind of shot blocking. He can guard a small forward, he can guard a power forward, he can post. He gives you a lot of flexibility as a coach in terms of how you can use him. He can play fast, he can play slow. When it’s all said and done, he doesn’t rattle, he doesn’t get nervous, he’s going to make big shots. He’s going to take shots. If you get on him, he looks at you funny like, coach, I have everything under control, no need to worry. So, it’s great to have a guy like that on your team.

Q. You guys got down early and then you threw the press at them again. It really seemed to jump start you guys. Is that something you might incorporate more and more as you go on?
COACH MCCAFFERY: We do it all the time. We pretty much are going to go to that thing when we’re on the free-throw line when we have a chance, maybe it’s a dead ball. A lot of times early you don’t get to the free-throw line, you don’t get a lot of dead ball situation, you don’t really get a chance to get into that defense. Then once we got in it, then we stayed in it because we had them a little bit sideways.

Q. These sometimes are dangerous games where you come off two highly emotional wins, you’re playing a team that’s got some good scorers, and it’s at home. How did you guys kind of gut through it, even though you were down?
COACH MCCAFFERY: That’s what we did, I think it was experience. Obviously we weren’t ready at the start. We were not. But when we got the lead we didn’t panic. They got a good team. White hits those two big threes back to back, Shields is driving the ball at the start of the second half, Webster, we couldn’t get him under control. They got some different weapons now. McVeigh’s been shooting, he didn’t shoot it tonight. If he shoots it, it’s probably a different game for them. But you’re right, it’s a game that took a lot to make sure that we won. And I think it’s a great lesson for us to understand even though you’re at home, this is a really good team. This is a team if you look at who they beat and who they played close, I mean, Miami is an overtime game. This team’s got weapons and they’re different than they were last year. And they’re young. So, took a lot for us to get this win and it was all experience.

Q. Dom gave you a pretty good effort off the bench?
COACH MCCAFFERY: He seems to be able to make really key threes when we need them. That one three I thought was really huge.

Q. What do you most hope to get out of these next few days?
COACH MCCAFFERY: Just want to get better. That’s all. Work on various aspects, both skill development for the players, collective improvement on our zone, our out of bounds plays, our motion offense, everything. We won’t really be focusing on preparing for Michigan State, we’re going to prepare to get better as a team.

Q. When you were recruiting Mike, is this the type of player you envisioned him being?
COACH MCCAFFERY: Yeah. Nobody saw him more than I did. So I knew exactly what he was going to be. He was terrific for us when he first got here and the more he’s really studied it because he was a big time scorer in high school. And I pretty much asked him to be the point guard and to get us into our stuff and understand time and score. And think of the guys he goes against night in and night out since he’s been here, and what you’re seeing is his development. He’s in great shape physically, he’s in a great place mentally, and everybody feels better when he’s got the ball.

Q. Clemmons, is it just simply kind of residue from what happened over the weekend?
COACH MCCAFFERY: Yeah, he’s hurting.